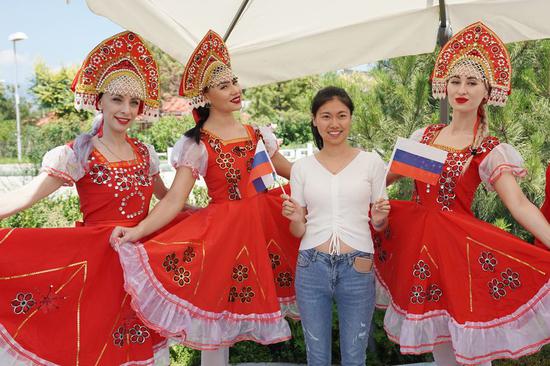 Performers pose for photos with a visitor during the "Russia Day" event at the Beijing International Horticultural Exhibition in Beijing, capital of China, Aug. 24, 2019. (Xinhua/Ju Huanzong)

China tops the list of Russia's most friendly countries, a recent opinion poll conducted by the Russian government-owned research center VTsIOM has showed.

The poll was conducted on Aug. 22 among 1,600 respondents over 18 years old by telephone interview and its results were published on Monday.

It showed that 45 percent of those polled thought that China is a country with which Russia has established the strongest friendly relations.

The Top 3 also includes Belarus with 30 percent and Kazakhstan with 21 percent.

The United States, Ukraine and the United Kingdom ranks the Top 3 of countries that the respondents believe have the most tense relations with Russia.

According to the survey, the United States remains the key potential source of military threat to Russia, although the share of those who hold this opinion has decreased to 53 percent from 57 percent in the December 2018 survey and 67 percent in the October 2018 poll.