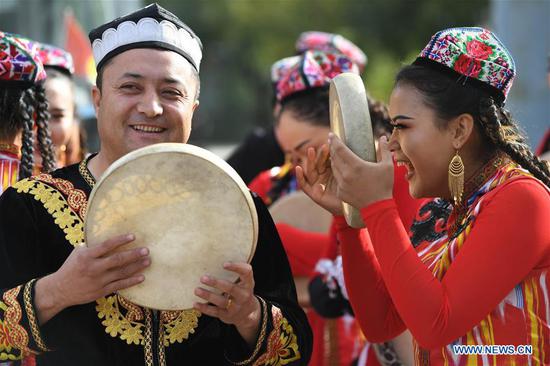 Chinese experts explained broadly and in detail to international media representatives on China's ethnic and religious policies, the social and economic development of Tibet and Xinjiang and the current situation in Hong Kong in a gathering at the United Nations.

The briefing at China's Permanent Mission to the UN was jointly held by the mission and the China Society for Human Rights Studies.

Chang Jian, director of the Research Center for Human Rights at Nankai University in Tianjin, emphasized in a presentation that China is a unified multiethnic country in which multiple religions coexist.

Xu Jianying, a researcher at the Chinese Academy of Social Sciences, elaborated on counterterrorism and de-extremization in Xinjiang.

He emphasized that the procedures in use comply with the law and are in keeping with the basic human rights of people of all ethnic groups in Xinjiang, including the right to survival and development.

Xu told the media that there have been no riots in Xinjiang for more than three years. "The society is stable and law and order are unprecedentedly good," said Xu.

"In light of China's national conditions, it is wise to explore and fashion policies against terrorism and extremism in a practical and innovative way and to form measures tailored to local conditions," Xu said.

Zuliyati Simayi, a professor at Xinjiang University, said: "At present, China is vigorously developing various undertakings in Xinjiang, earnestly guaranteeing the rights of all ethnic groups to participate in development on an equal footing, sharing development achievements and continuously making new developments and progress in the cause of human rights in Xinjiang".

Kalsang Drolma, a researcher at the China Tibetology Research Center, spoke of the achievements in the development of human rights in Tibet in a presentation backed by statistics. She underlined that the people in Tibet's political rights to their language and culture and to freedom of religious belief have been fully guaranteed.

Chen Xinxin, a researcher at the Chinese Academy of Social Sciences, also gave a presentation of the current situation in Hong Kong.

Chen explained the current situation "seriously undermines the rule of law, undermines social order, and violates the rights and freedoms of the majority".

He said that since Hong Kong's reunification with the motherland, the central government has been dealing with Hong Kong affairs strictly in accordance with the Constitution and the Basic Law of the Hong Kong Special Administrative Region.

The principle of "one country, two systems" has won the heartfelt support of the entire Chinese people, including those in Hong Kong, and widespread praise of the international community, Chen said.