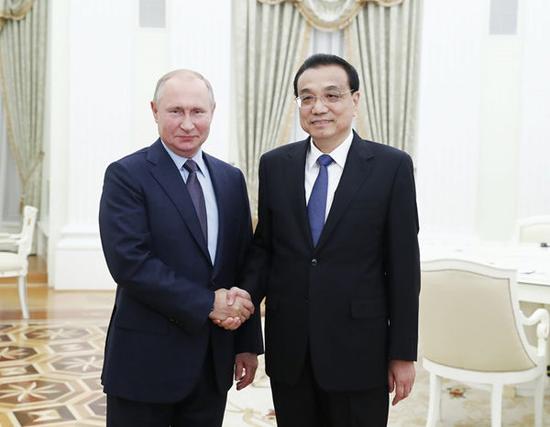 Li arrived at Moscow after holding talks and co-chairing the 24th regular meeting between Chinese and Russian heads of government with his Russian counterpart, Dmitry Medvedev, in St. Petersburg.

Recalling his meeting with Medvedev, Li said this visit helped draw a comprehensive plan for exchanges and cooperation between China and Russia in various fields, and achieved a lot of new results.

The three-day visit came as the two countries are celebrating the 70th anniversary of their diplomatic ties. During Xi's visit to Russia in June this year, China-Russia relationship was elevated to a comprehensive strategic partnership of coordination for a new era.

China and Russia are each other's biggest neighbor, said Li, adding that a healthy and stable development of bilateral relations is not only beneficial to both sides, but also conducive to the region and the world.

China is willing to continue to consolidate friendship, deepen cooperation and strengthen exchanges with Russia, as well as jointly safeguard an international system with the United Nations at its core and a multilateral trading system based on the World Trade Organization's rules, which is of great significance for promoting development, prosperity, peace and stability of the world, said the premier.

Noting that China and Russia have broad prospects for cooperation, Li said that China stands ready to better synergize the Belt and Road Initiative (BRI) with the Eurasian Economic Union, to promote the simultaneous increase in both the scale and the quality of the two-way trade.

Congratulating on the 70th anniversary of the founding of the People's Republic of China, Putin said relations with China are a priority of Russian diplomacy.

Bilateral cooperation has recorded remarkable achievements since the two countries established diplomatic ties 70 years ago, he said, noting that their relations have been upgraded to a comprehensive strategic partnership of coordination for a new era.

Noting the meeting between Li and Medvedev has effectively promoted bilateral practical cooperation with its many new results, he pledged Russia's willingness to better align its development strategy with the BRI, constantly expand the two countries' trade and promote common development.

Also on Wednesday, Li laid a wreath at the Tomb of the Unknown Soldier in Moscow.