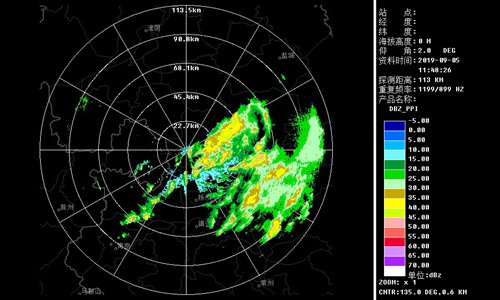 The new type of full digital radar device is able to collect data on the location, intensity and speed of meteorological objects including clouds and rain, and provide real-time monitoring and early warning of potentially dangerous weather, the Beijing Institute of Radio Measurement affiliated with the state arms giant China Aerospace Science and Industry Corp, said in a statement sent to the Global Times.

The meteorological radar project team was tasked with building a nationwide monitoring and early warning system for disasters such as storms and tornados.

They explore the cause of disasters and seek ways to identify and issue early warnings for tornado-like weather.

It can scan a potentially dangerous weather system in 90 seconds, whereas conventional radars take six minutes.

According to CMA data from 1991 to 2014, 43 tornados hit China annually, and East China's Jiangsu Province and South China's Guangdong Province were hit the most.

The new radar device installed in the city of Gaoyou in Jiangsu is undergoing tests, marking a key step in the "tornado detecting radar research and development" being undertaken under the country's research plan of "natural disaster monitoring, early warning and prevention," according to the institute.

China has dedicated years to building its Fengyun meteorological satellite system involving the launch of three high-orbit and six low-orbit Fengyun satellites before 2025.