Spokesperson Hua Chunying said that the remarks are whitewashing violent crimes as a struggle for human rights and freedom, and deliberately misinterpreting the work of Hong Kong police as violent repression when the police were only enforcing the law, fighting crimes and upholding social order.

The remarks even incited the Hong Kong residents to engage in confrontation with the HKSAR government and China's central government, she said. 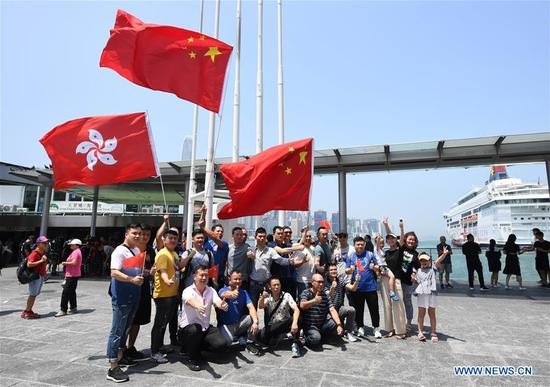 "They can't wait to see a world in turmoil," Hua said.

The spokesperson said the U.S. side had repeatedly denied its involvement in the on-going violent incidents in Hong Kong. However, these remarks have provided the world with new and powerful evidence on the country's involvement.

"In the U.S., members of Congress are also called lawmakers. I cannot help asking the relevant senators and House representatives: Are you lawmakers or law-breakers?" Hua said.

She said that Hong Kong affairs are entirely China's internal affairs, and those U.S. politicians are neither entitled nor qualified to comment on them.

"Just mind your own business," Hua said. "Hong Kong is none of your business."

A spokesperson of the Office of the Commissioner of the Chinese Foreign Ministry in the HKSAR earlier also denounced U.S. Senate Republican leader Mitch McConnell's remarks on the Hong Kong Special Administrative Region (HKSAR) after the heavyweight senators accused Beijing of violent crackdown on protesters.

Earlier, McConnell tweeted that the people of Hong Kong are bravely standing up to the Communist Party of China and Beijing was trying to "encroach" their autonomy and freedom.

"Any violent crackdown would be completely unacceptable. The world is watching," he tweeted.

The spokesperson said McConnell's words are totally "misleading and groundless" and he is sending wrong signals to radical protesters. 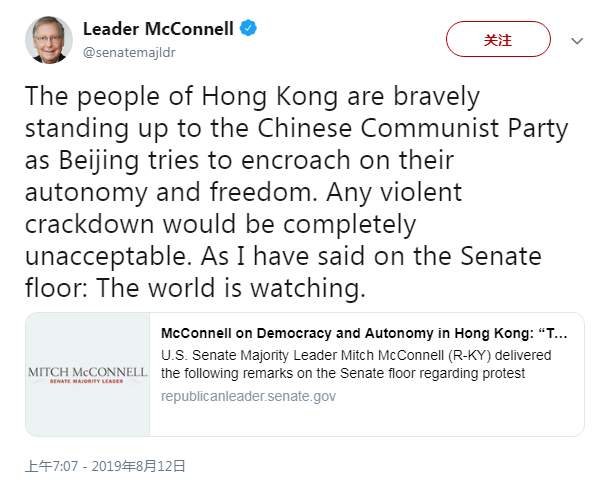 Certain U.S. Congressman ignored the facts and misled public opinion by making groundless accusations on the Chinese government, and that Beijing strongly rejects such irresponsible comments, the spokesperson went on to say.

Protests in Hong Kong have turned extremely violent, and some radical protesters repeatedly attacked the police in extremely dangerous and cruel ways, and they went against the rule of law and order in the region, and their acts seriously threatened the lives of the people, the spokesperson said.

Their demands and behavior have touched the bottom line of the "One Country, Two Systems", the spokesperson added.

Defending the police's handling of protests and violence, the spokesperson said Hong Kong police force has been restrained, and the U.S. chooses to adopt double-standard.