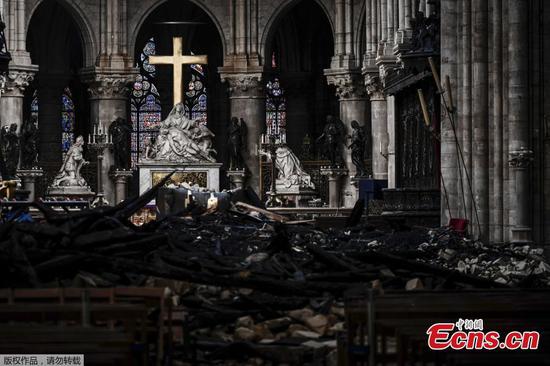 Rubble and the cross inside the Notre Dame de Paris Cathedral, Wednesday May 15, 2019 in Paris. (Photo/Agencies)

The streets around Notre Dame Cathedral in Paris were closed off on Tuesday as workers started taking measures against the risk of lead contamination caused by the April blaze.

When the fire ripped through the Gothic building, hundreds of tons of lead melted, spewing toxic dust into the air. Levels of lead remain exceptionally high at some spots inside the cathedral, and in the soil of the adjacent park and roads. Those areas have been closed to the public since April 15.

In late July, two schools in a neighboring district were closed after worrying amounts of lead particles were detected. On Thursday, workers sprayed a special gel onto the playgrounds at the two closed schools. The gel attracted the lead particles as it dried and was later removed, according to city authorities.

Treatment like this will now apply to the area around the cathedral. City authorities said the halted work to clean up the ravaged cathedral will resume when the toxic lead is fully removed. Enditem