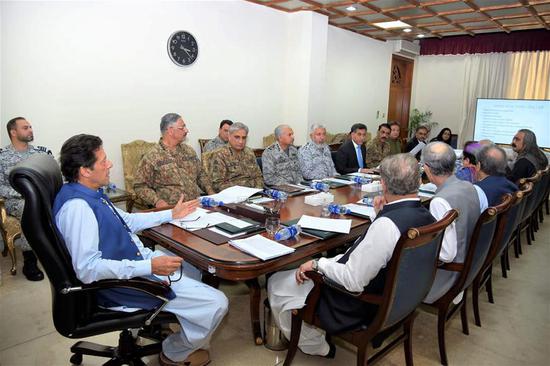 Pakistan on Wednesday informed India to withdraw its high commissioner after the country decided to downgrade diplomatic relations and suspend trade ties with India during a national security committee meeting amid recent Kashmir tensions.

Prior to the expel notification, a Pakistani Foreign Ministry official told Xinhua that the ministry has been told to cancel all the commitments with the Indian embassy.

The Indian government has also been informed that Pakistan will not be sending its high commissioner-designate to India, the Foreign Ministry here said in a statement.

Pakistan adopted a series of measures during the national security committee meeting on Wednesday against India in the wake of India's revocation of the special status to Indian-controlled Kashmir.

Meanwhile, the country's parliament passed a resolution against the Indian decision and the recent surge in unprovoked firing and shelling by Indian forces along the Line of Control, the de-facto border between the two countries in the disputed area.

Addressing the joint session here, Fakhar Imam, chairman of the Pakistan's National Assembly's Committee on Kashmir, said that Kashmir is an internationally recognized dispute on the agenda of the United Nations Security Council, and the Indian move posed a great threat to peace, security and stability in South Asia.

The joint parliament session also called upon the Organization of the Islamic Cooperation to convene an extraordinary high level session on the Indian move, and asked the international community to stop India from undertaking the actions that may lead to a dangerous escalation to affect not only South Asia but the entire world.

During the national security committee meeting chaired by Prime Minister Imran Khan, senior cabinet ministers and military officers discussed the situation inside Indian-controlled Kashmir and along the Line of Control.

Khan also directed all diplomatic channels to be activated to highlight human rights violations in India-controlled Kashmir and directed the military to continue its vigilance and be prepared to face any aggression.

Pakistan also decided to take the Kashmir issue to the United Nations.

Talking to the local media, the country's Foreign Minister Shah Mahmood Qureshi said that his country will take the issue to the UN Security Council, and will also take friendly countries into confidence regarding the dispute.

Local reports said that Khan has made a telephone conversation to his British counterpart Boris Johnson. However, the details of the conversation were not revealed yet.