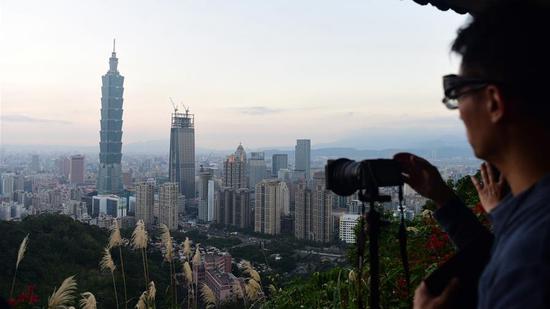 Nearly 60 percent of Taiwan residents are dissatisfied with the ruling Democratic Progressive Party's (DPP) policy toward the Chinese mainland, while over 60 percent back Kaohsiung mayor Han Kuo-yu's call to "support the 1992 Consensus and promote city-to-city exchanges across the Taiwan Strait," according to poll results released on Thursday by the Taiwan Competitiveness Forum and the New Era Think Tank.

The poll, conducted from January 9 to 11 with 1,085 valid samples, shows that 58.9 percent of respondents are dissatisfied with the DPP's mainland policy and 60.6 percent believe the policy is not helpful for maintaining peace and stability across the Strait.

The DPP administration's call for all political parties in Taiwan not to mention the 1992 Consensus is irresponsible, 46.3 percent of respondents said. As many of the 65.6 percent are not satisfied with the DPP's performance since coming to power in May 2016.

Meanwhile, 62 percent of respondents expressed agreement in the new Kaohsiung mayor's call for support of the 1992 Consensus and enhancing city-to-city exchanges across the Strait.

Han, a member of the Chinese Kuomintang (KMT) party, reiterated his "firm support" of the 1992 Consensus on Thursday. After being elected mayor of Kaohsiung late last year, Han said he would set up a cross-Strait working group to promote exchanges between the port city and the Chinese mainland.

At a press briefing on Wednesday, a mainland spokesperson said adhering to the one-China principle and pursuing national reunification are the essence of the 1992 Consensus.

"The 1992 Consensus is the common political foundation for development of cross-Strait relations and it clearly defines the nature of the ties," said Ma Xiaoguang, spokesperson for the Taiwan Affairs Office of the State Council. "The consensus reflects the adherence to the one-China principle by both sides in their efforts to seek national reunification."