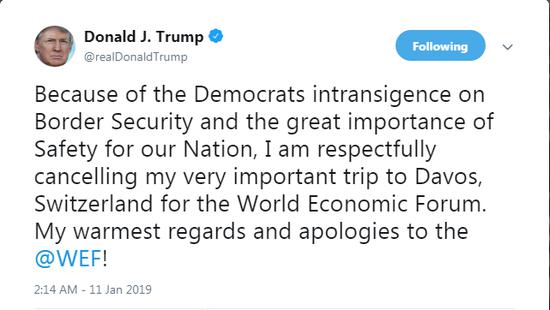 U.S. President Donald Trump has canceled U.S. delegation's trip to Davos due to the ongoing federal government shutdown, now in its 27th day, according to the White House.

"Out of consideration for the 800,000 great American workers not receiving pay and to ensure his team can assist as needed, President Trump has canceled his delegation's trip to the World Economic Forum in Davos, Switzerland," said Sarah Sanders, White House press secretary, in a statement on Thursday.

The World Economic Forum (WEF) in the Swiss ski resort city of Davos is one of the most important gatherings for global business leaders and this year's event will begin on January 22.

Trump, who attended last year's Davos event, said last week he won't personally attend it this year, citing the row in Washington over his calls for a Mexico border wall.

U.S. Treasury Secretary Steven Mnuchin and Secretary of State Mike Pompeo were expected to lead the U.S. delegation on behalf of the president.