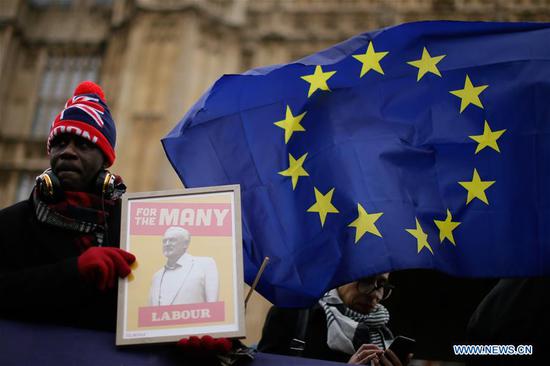 A demonstrator supporting British Labor party leader Jeremy Corbyn stands outside the Houses of Parliament in London, Britain, on Jan. 16, 2019. The British parliament on Tuesday rejected overwhelmingly the Brexit deal. Main opposition Labor party leader Jeremy Corbyn tabled a motion of no confidence, with a debate scheduled for Wednesday to decide whether May's government will collapse. (Xinhua/Tim Ireland)

"The red lines are from the UK, they are not ours, and they closed doors" in negotiating the exit agreement, Barnier said in Portugal's parliament while defending the agreement already negotiated as "the best possible".

"If the United Kingdom fiddles with the red lines, we move immediately. If they want more, we're ready," he said, cited by Lusa.

The EU official said that all models are available but he stressed that "everyone has rights and obligations."

"We respect the British will and respect the red lines, as we respect the principle of the single market and the indivisibility of the four freedoms," he said.

At a joint press conference with Barnier on Thursday, Portuguese Prime Minister Antonio Costa said that Portugal is fully politically aligned with European Union institutions on the UK's departure from the EU.

"The attitude of the (European) Council and Commission has been exemplary and what we want is for the United Kingdom to be able to respond to the professional, responsible and clear way in which negotiations on the European side have been conducted by Michel Barnier," Costa said.

The British parliament rejected on Tuesday the UK's exit agreement negotiated by the government of Prime Minister Theresa May with Brussels by a 432-202 vote.