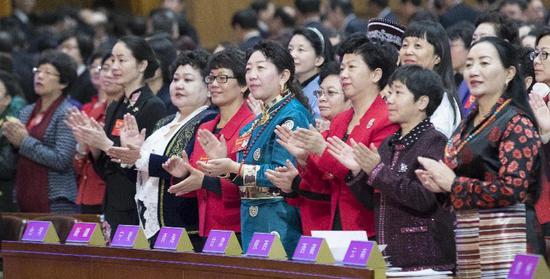 Under the guidance of "Xi Jinping Thought on Socialism with Chinese Characteristics for a New Era," women's federations at all levels have lifted the spirit of the Chinese women and highlighted their self-improvement, perseverance, and wisdom, a senior official of the Communist Party of China (CPC) Zhao Leji said on Tuesday.

Chinese President Xi Jinping, also general secretary of the CPC Central Committee and chairman of the Central Military Commission, attended the ceremony at the Great Hall of the People in Beijing.

The meeting was also attended by other leaders of the CPC and the state including Li Keqiang, Li Zhanshu, Wang Yang, Wang Huning and Han Zheng, all of whom are members of the Standing Committee of the Political Bureau of the CPC Central Committee.

Women are attached with great expectations to act as builders of a great cause, advocators of civilization and fighters who dare to dream, said Zhao in his speech.

We hope Chinese women could work vigorously to achieve the Two Centenary Goals and the Chinese Dream of the great rejuvenation of the Chinese nation, he added.

China has made headway in promoting women's development in fields like gender equality, education, and health.

According to the National Bureau of Statistics, female employees in China made up 43.1 percent of the country's workforce in 2016, exceeding the 40-percent target set in the Program for the Development of Chinese Women (2011-2020).

According to the World Health Organization, China is now one of the top 10 countries in the world in terms of high-level women's and children's health.