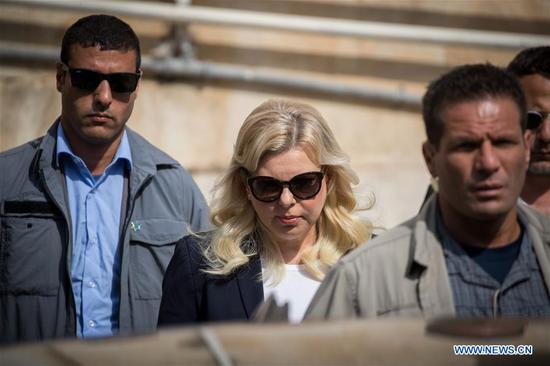 Sara Netanyahu (C), wife of Israeli Prime Minister Benjamin Netanyahu, arrives for a court hearing at the Magistrate's Court in Jerusalem, on Oct. 7, 2018. Sara Netanyahu went on trial on Sunday for alleged crimes including fraud over misuse of public funds to pay for hundreds of gourmet meals. (Xinhua/JINI)

Israeli Prime Minister's wife, Sara Netanyahu, went on trial on Sunday for alleged crimes including fraud over misuse of public funds to pay for hundreds of gourmet meals.

She arrived at the Jerusalem Magistrate's Court to face the start of her trial, surrounded by her lawyer and security guards, and made no comments at the site.

Sara Netanyahu, 59 years old, is charged with fraud and breach of trust.

According to her charge sheet, she fraudulently obtained some 100,000 U.S. dollars of public funds for hundreds of meals supplied by well-known restaurants and chefs to the official Prime Minister's Residency in Jerusalem while falsely stating that there were no cooks or staff at home.

Her lawyers have said she was unaware of the regulations that forbid her to do so and that the meals were ordered by an aide to serve visiting officials.

She has refused a plea bargain, offered to her by the State Prosecutor's Office, in which she could plead guilty in some charges and return most of the money taken, in return for the cancellation of the trial.

The long-time Prime Minister Benjamin Netanyahu is entangled in a series of criminal corruption investigations. He denies any wrongdoing and accused the investigations as part of witch hunt orchestrated by the "leftist" media and his political enemies.