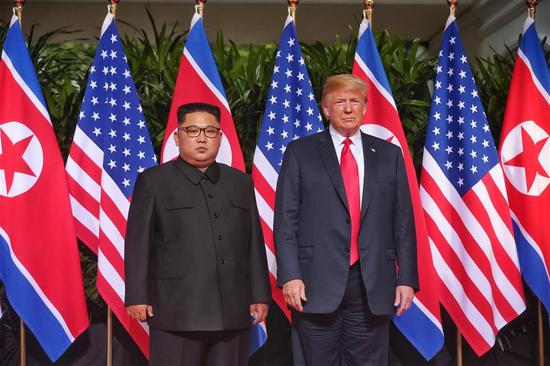 Top leader of the Democratic People's Republic of Korea (DPRK) Kim Jong Un and U.S. President Donald Trump met here Tuesday for a landmark summit, the first between incumbent leaders of both countries since the 1950-53 Korean War.

Kim wearing glasses and dressed in a dark suit and Trump sporting a red tie shook hands in front of the cameras at around 9:00 a.m. local time (0100 GMT) at the luxury Capella hotel on Sentosa resort island off the southern tip of the city state.

The much-anticipated summit marked the first ever meeting between a top DPRK leader and a sitting U.S. president.

Trump, who noted that he expected to meet Kim "many" times, said: "This is just a new beginning... We're going to have a great discussion and a terrific relationship."

"The way coming here was not easy," said Kim. "Old prejudices and practices worked as obstacles on our way forward, but we overcame them to be here."

They had one-on-one talks, with only interpreters by their sides, for about 40 minutes before an expanded meeting involving senior officials from both sides and a working lunch.

The summit, described by Trump as a "get-to-know-you" meeting, finally went ahead as scheduled after an on-again-off-again dramatic twist.

Trump abruptly canceled his planned June 12 meeting with Kim in late May, citing "tremendous anger and open hostility" displayed by Pyongyang's recent remarks. But the DPRK responded calmly by saying that it was ready to sit down with the U.S. side at any time for talks to solve the problems existing between them.

Shortly after Trump's surprise cancellation of the U.S.-DPRK summit, South Korean President Moon Jae-in met with Kim for a second time in Panmunjom, a month after their first summit on April 27.

The Kim-Trump summit, scheduled for June 12 in Singapore, was put back on track following multi-track talks between DPRK and U.S. officials in New York and Singapore's efforts to salvage the highly-anticipated meeting.

The two leaders signed a "comprehensive" joint statement after their summit. The United States would be committed to providing security guarantees to the DPRK in exchange for Pyongyang's commitment to complete denuclearization of the Korean Peninsula.

"We are going to take care of the very big and very dangerous problem for the world," Trump said at the signing ceremony, adding that his meeting with Kim was "far better than anybody even predicted."

For his part, Kim said: "We had a historic meeting today and we decided to leave the past behind. The world will see a major change."

The meeting came after an inter-Korean summit on April 27, when Kim and Moon reaffirmed their commitment to complete denuclearization of the peninsula and agreed to push for multilateral talks, including China and the United States, to turn the 1953 armistice agreement into a peace treaty.

The DPRK openly dismantled its nuclear test site ahead of the summit in late May, which Trump called "a very smart and gracious gesture."

"The United States must guarantee there will be no regime change in the DPRK," said Lee Sang-man, professor at Kyungnam University in Seoul.

But Trump told a press conference after his summit with Kim on Tuesday that sanctions against the DPRK would be in place until Pyongyang completely denuclearizes.

Washington and Pyongyang have been at odds over the specific model of denuclearization after U.S. National Security Adviser John Bolton suggested the so-called "Libya model."

The agenda for improving bilateral ties between the two long-time rivals was also discussed at the summit.

"The United States and the DPRK commit to establish new U.S.-DPRK relations in accordance with the desire of the peoples of the two countries for peace and prosperity," read the joint statement.

The DPRK and the United States have had no diplomatic relations since the 1950-53 Korean War. U.S. interests are represented by the Swedish embassy in Pyongyang.

Trump told the press conference on Tuesday that the United States would stop annual joint military exercises with South Korea, denounced by Pyongyang as rehearsals for a northward invasion.

"Now we are seeing what China has advocated. China's 'dual-track' approach is being realized," said professor Lee at South Korea's Kyungnam University.

China has long advocated a "dual-track" approach: denuclearization on the Korean Peninsula and an established peace mechanism.

Chinese State Councilor and Foreign Minister Wang Yi said the meeting was of great significance, and something China long called for.

"We hope that the two leaders will work to eliminate barriers, build mutual trust, overcome difficulties, and reach basic consensus and make substantive progress in promoting denuclearization and establishment of a peace mechanism on the Korean Peninsula," he said.

Wang stressed that China would continue to play a constructive role in bringing peace to the Peninsula.