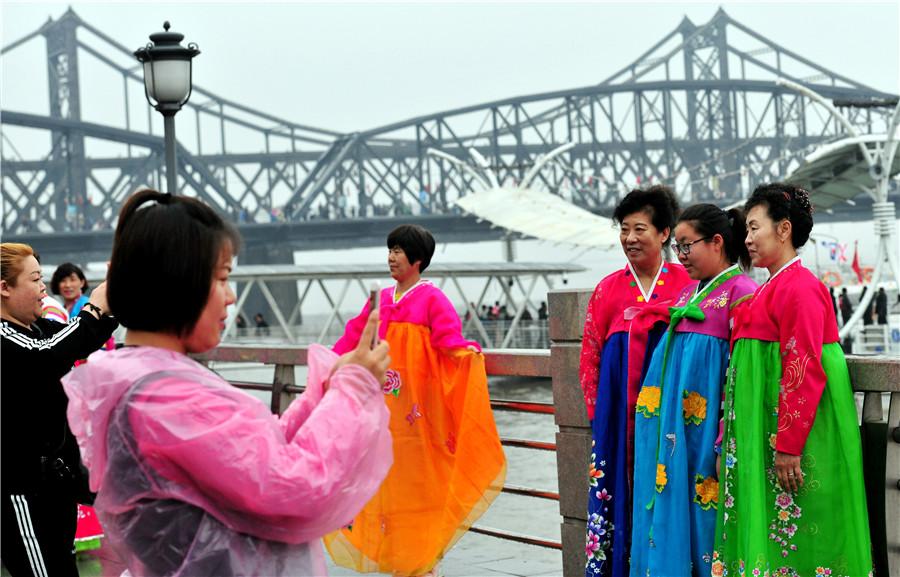 Tourists dressed in Korean ethnic garb pose in front of the Yalu River in Dandong, Liaoning province, on May 1. (YU HAIYANG/FOR CHINA DAILY)

On March 25, Zhou Linqing rode the train from Dandong, Liaoning province, to Pyongyang, capital of the Democratic People's Republic of Korea. He was going to meet with business partners from the country, which is clearly visible across the Yalu River, the waterway that flows through the northeastern city.

The journey, which takes about seven hours, is usually smooth and untroubled, but on this occasion Zhou's train stopped suddenly a few hours after leaving Dandong. The native of the border city recalled that his train remained stationary for a long time before moving on, but no reason was given.

Three days later, he learned that the train had been stopped to make way for a special train carrying Kim Jong-un, who was heading to Beijing for talks with President Xi Jinping as part of the DPRK top leader's first overseas trip since assuming office in December 2011. He also visited Dalian in Liaoning in May.

Kim is now on his third overseas visit, having arrived in Singapore on Sunday ahead of a summit meeting with United States President Donald Trump. 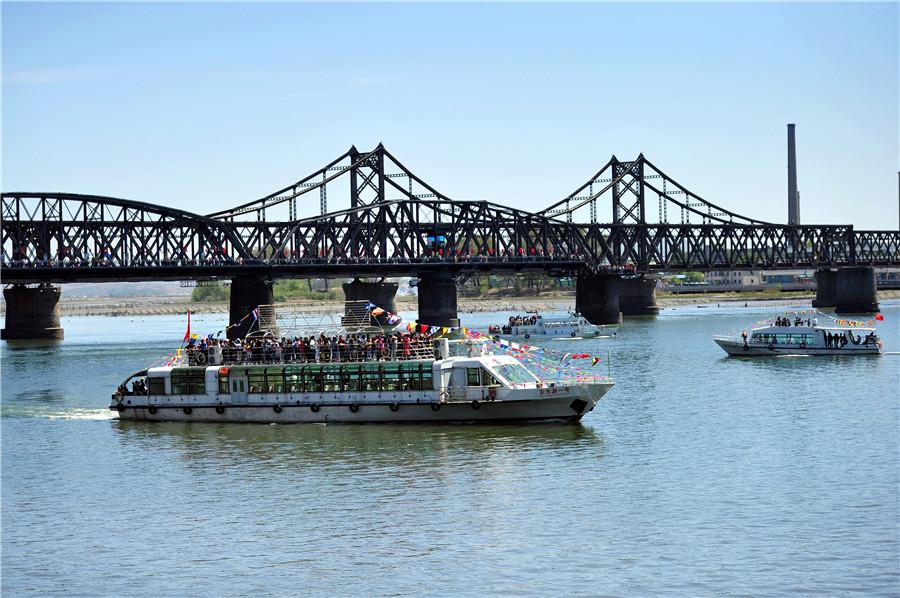 Back in Pyongyang, Zhou and his business partners from the DPRK watched a lengthy TV news report about Kim's historic meeting with Xi, including footage of a handshake between the smiling leaders that quickly went viral on social media.

"I closely monitor the international situation regarding the DPRK because changes can instantly and directly affect cross-border trade, but the meeting still came as quite a shock. I could tell that my business partners felt the same way," the 54-year-old said.

"Don't get me wrong－it was a good shock. My business partner from the DPRK said the well-publicized handshake between Xi and Kim was definitely worth celebrating, and offered me a drink. It made us more confident about doing businesses with each other in the future," he said, sitting in his office on Gaoli Street in Dandong.

As he spoke, Zhou glanced at a businesswoman from the DPRK who was talking to one of his employees about placing orders for a wide range of items. "It seems like she needs everything," he said. 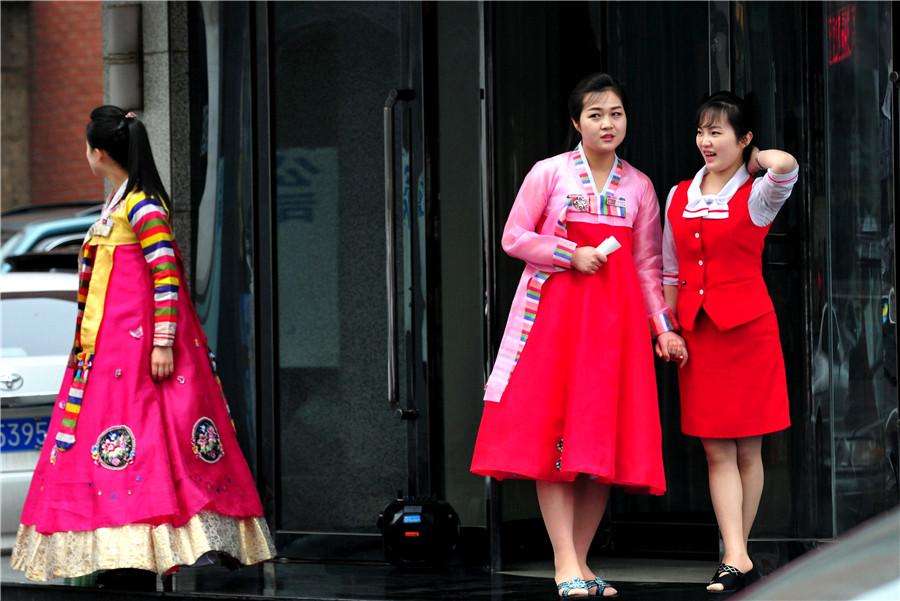 Gaoli Street is one of the most popular places in Dandong for people from the two countries to meet and discuss business opportunities. On Zhou's desk, small Chinese and DPRK national desk flags flank a collection of books about Kim Il-sung, the DPRK's founder who was Kim Jongun's grandfather.

Printed in the DPRK, the books were presented to Zhou by his counterparts in the country. He has studied the volumes, which are written in Chinese, carefully to glean hints that would help him decode the mindset of the country's leaders.

Many people find the DPRK a mysterious place－but Zhou is not one of them. He travels to the country frequently and regards it as just another foreign destination with plenty of business potential.

"People are usually mystified, but they don't try to understand the place. Of course, it is unique in many ways, such as its political system and the way businesses are run, but as long as you really understand how things work there, it's just business as usual," said Zhou, who has specialized in cross-border trade since 2008. 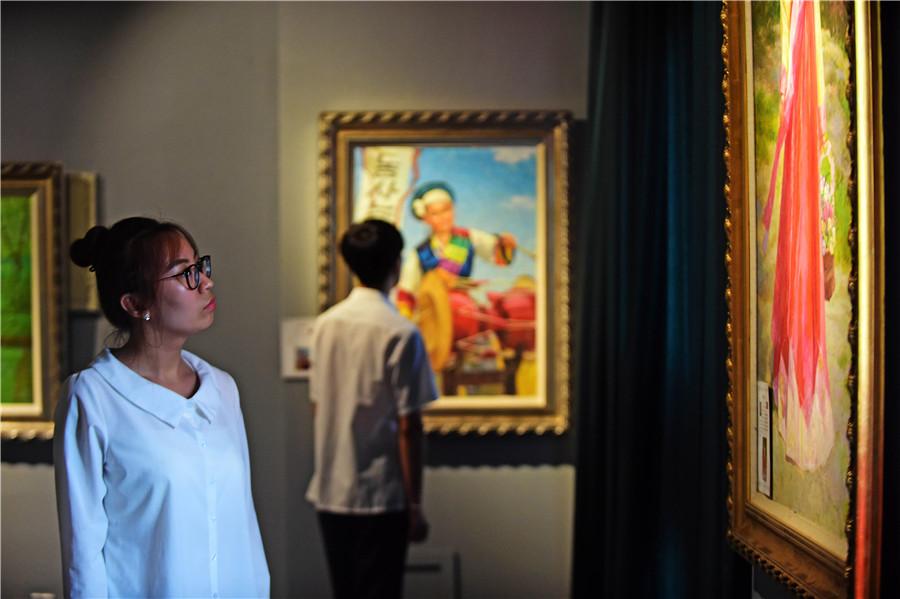 A woman examines an oil painting for sale at a border trade zone in Dandong, Liaoning province, which sells goods from the Democratic People's Republic of Korea. The zone's business has declined as a result of sanctions imposed on the DPRK by the UN last year. (YANG QING/XINHUA)

In August and September, the UN Security Council imposed two sets of sanctions on the DPRK, looking to exert economic pressure. The sanctions banned the export of coal, iron, lead and seafood, and also limited imports of crude oil and refined petroleum products. Moreover, they prohibited DPRK nationals from working overseas. The council has passed a number of similar resolutions since the DPRK conducted its first nuclear test in 2006.

As someone who specializes in providing machinery and services for the DPRK's mining sector, Zhou has been affected. "My business has been badly hit. Some people quit doing business with the DPRK for good after the latest sanctions," he said.

In December, three months after the sanctions were imposed, the trade volume between China and the DPRK was $310 million, a year-on-year decline of 50 percent, according to the General Administration of Customs.

Zhou said businesspeople have to be very flexible to trade with the DPRK because its economy is heavily influenced by the international situation and it is impossible to predict when more sanctions will be imposed. According to the Dandong government, the city has more than 600 businesses that trade with the country. 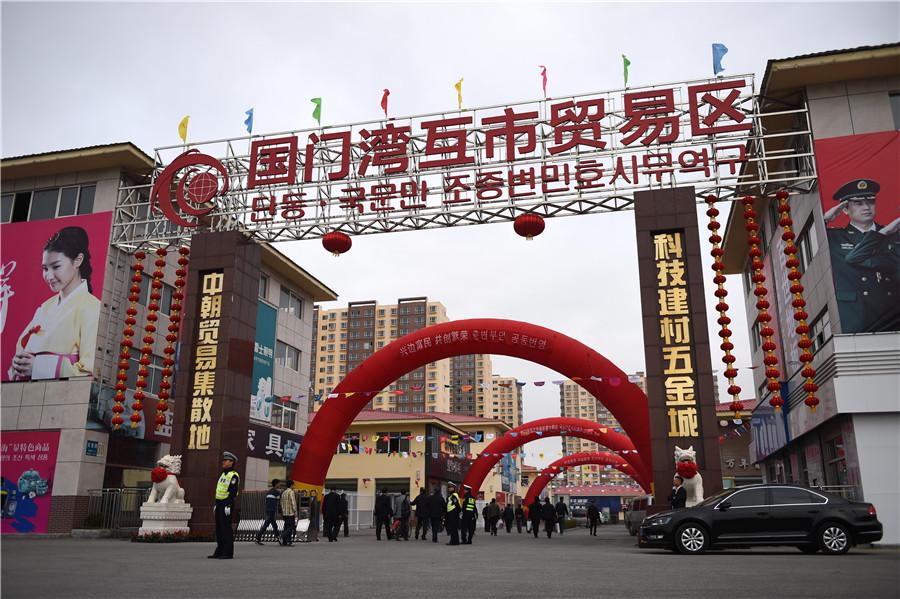 Dandong residents visit the trade zone on October 15, 2015, the day it opened for business. (PAN YULONG/XINHUA)

The good news for Zhou is that DPRK residents rely heavily on small businesses to provide them with all kinds of goods, but the country's unstable electricity supply means nonelectrical items are especially popular.

"The fact is that demand is rising and unstoppable," he said.

With rail, road and river routes directly connected with Sinuiju, a city in the DPRK close to the border, more than 70 percent of China's trade with the country passes through Dandong, according to the local government. That means the city and its people have been always sensitive to changes in the international situation involving the DPRK, and, more important, they are always affected by it.

The number of cargo trucks crossing the China-DPRK Friendship Bridge, which opened in 1943 and connects Dandong and Sinuiju, has fallen sharply since China implemented the UN sanctions, according to Zhang, a veteran cross-border businessman who declined to give his full name.

"For people in Dandong, the most obvious changes are that there are no young women from the DPRK serving at joint venture restaurants that are famous for authentic DPRK cuisine, and seafood from the DPRK is no longer available on dinner tables," the 50-something said. 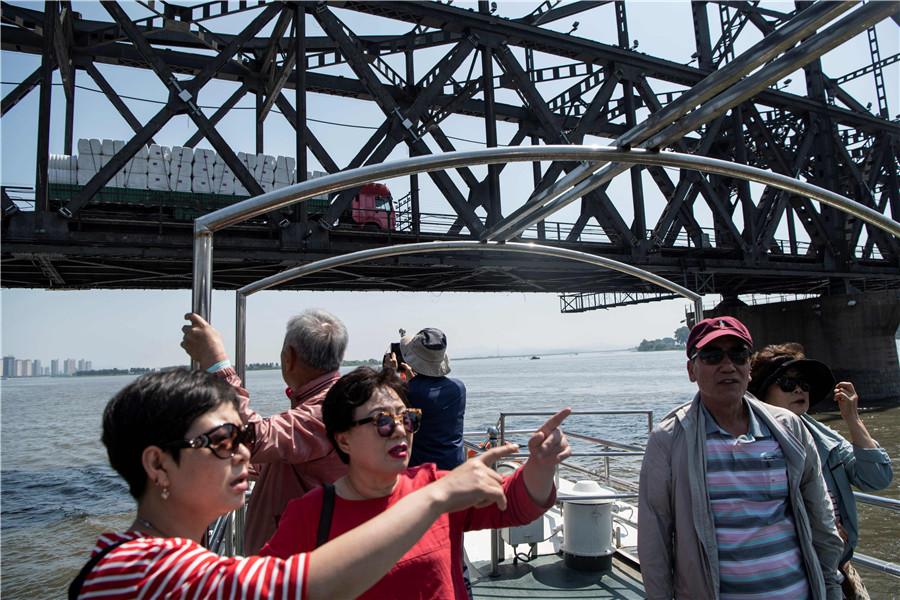 Zhang added that local people have not reacted to speculation in some parts of China that Dandong could be a future Shenzhen－the city in Guangdong province that was the country's first special economic zone. The speculation erupted after Kim announced plans to focus on economic development during a meeting in the DPRK on April 20.

"Those people are so hotheaded. They need to come to Dandong and look across the Yalu River at night. When they see the darkness of Sinuiju as a result of the electricity shortage, and the status of the new bridge across the river they won't believe everything they read about the DPRK," he said, with a laugh. 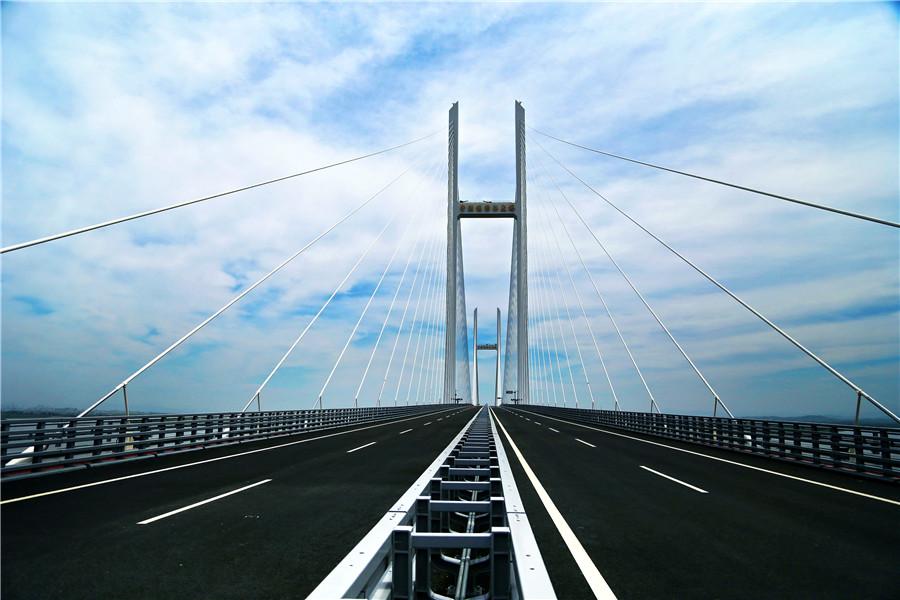 To boost cross-border trade, construction of a new crossing, officially called the New China-DPRK Friendship Bridge, started in 2011 and was completed in 2014. However, the new bridge－about 12 km downstream from the old 940-meter-long construction－hasn't been put into use because construction of a road to connect it with Sinuiju hasn't started yet.

"At the moment, the new bridge only functions as a holder for neon lights; it actually looks very pretty when the colorful lights are turned on at night. Let's talk about the opening-up of the DPRK; when will trucks be able to use this expensive bridge?" Zhang said.

"Some of my friends believe the hype and have even asked me how they can buy property in Sinuiju－they are deadly serious."

After the UN imposed the latest sanctions, Yao Xing, 28, a member of the younger generation of cross-border businesspeople in Dandong, shifted his focus from importing diesel to taking tourists to the DPRK.

"We've seen a rising number of young Chinese showing an interest in visiting the country because they have heard it mentioned frequently in the news in the past two years and are curious. Although tourism is not nearly as profitable as importing diesel, business is booming," he said.

To help young people understand more about the DPRK, Yao and his team launched a subscription service on WeChat in February last year. He hopes young people who subscribe to their service will realize that visiting the country is not as difficult as they had assumed and that it could be fun to take a trip.

"The rising demand means we have to book train tickets from Dandong to Pyongyang at least a month in advance now. Also, many people view the once-a-day international train to the DPRK as an attraction in its own right, although the 220-kilometer journey can take up to seven hours because of security checks," Yao said.

Zhou, the businessman, said that given the sanctions imposed over the years, social development in the DPRK has made real progress in the past decade. He encouraged people to visit and see the country for themselves.

"Of course, like everyone else in Dandong, I will closely follow the meeting between Kim and Trump because it will have an influence on the city one way or another. In addition to looking forward to seeing the two of them shake hands, I also want to see the UN take its hands off the 'sanctions button', which would have an immediate, beneficial effect on my business," he said.