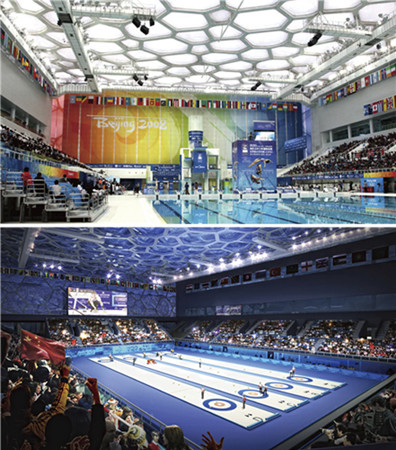 The National Aquatics Center, host to swimming events (above) during the 2008 Games, will be transformed into the 2022 Games’ curling venue, as shown in the computer generated image (below). (PROVIDED TO CHINA DAILY)

New construction and transformation of sports venues for the Beijing 2022 Winter Olympics — with energy-saving features and designs to boost post-Games use — are expected to leave a profound legacy after the big event.

The National Aquatics Center was dubbed the Water Cube when it hosted swimming competitions during the 2008 Summer Olympics. Now, the facility, in Beijing's northern downtown, is being reinvented as an ice cube to make it the 2022 Games' curling venue. The change is

scheduled to be completed in the second half of 2019, according to the venue's owner, Beijing State-owned Assets Management Co.

"The renovation of a summer sport venue into a curling arena capable of hosting various ice-based sports and entertainment activities helps diversify the functions and revenue sources of this facility," Yang Qiyong, general manager of the center, said on Tuesday.

The core transformation procedure was successfully tested in April 2017. The procedure involves filling the pool with steel structures, leveling the surface with a retractable pool cover made of concrete and producing competition-level ice, and will take about a month after completion of upgrades in power supply, humidity control and cooling systems.

However, the venue team has to overcome challenges in temperature control to keep the ground cold enough for a proper ice surface while keeping the venue's upper layer warmer for spectator comfort, Yang said.

"It's easy to just apply as many air conditioners as needed, but we will take a more energy-efficient solution featuring natural ventilation through existing vents in the main structure of the venue," he said.

The venue already is a busy destination for swimming and diving contests and international events such as the welcome banquet for the 2014 APEC gathering. Its status as a compelling example for post-Olympics operation of permanent facilities will be cemented when the upgrades for 2022 are completed, said Gui Lin, an expert in planning, construction and sustainability with the Beijing 2022 Winter Olympics organizing committee.

The aquatics center is among eight existing 2008 venues in the capital to be transformed and refurbished for competition and noncompetition purposes for the 2022 Olympics, which will use 26 venues in downtown Beijing, northwestern Yanqing district and co-host Zhangjiakou, Hebei province.

As an integral part of the rejuvenation of the abandoned Shougang steel mill in western Beijing's suburbs, a new winter sports park will be built based on silos, dorms and plant structures in the area. It will host the big air snowboarding competition and related leisure activities by 2022.

Big air is a new Winter Olympics discipline that involves snowboarders hurling themselves off a snow ramp to perform aerial stunts such as flips and spins before landing on the slope.

Beijing's proposal to build a permanent ramp for the event at north end of the Shougang industrial area, against the backdrop of four 70-meter cooling towers, was approved by the International Olympic Committee in September. It is a unique combination of dynamic Olympic action with industrial heritage, according to Beijing 2022 organizing committee's general planning and construction department.

"The Winter Olympics excitement will bring the old industrial park back to life again in a vibrant way," he said.