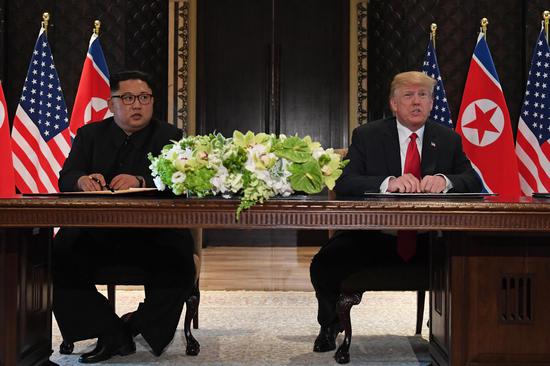 U.S. President Donald Trump (R) and top leader of the Democratic People's Republic of Korea (DPRK) Kim Jong Un sign documents that acknowledge the progress of the talks and pledge to keep momentum going, after their summit at the Capella Hotel on Sentosa island in Singapore, June 12, 2018. (Photo/Agencies)

Kim and Trump signed a joint statement after their meeting -- the first between a sitting U.S. president and a DPRK leader -- at the Capella Hotel on Singapore's resort island of Sentosa.

In the joint statement, Trump committed to providing security guarantees to the DPRK, while Kim reaffirmed his firm and unwavering commitment to complete denuclearization of the Korean Peninsula.

The two leaders conducted a "comprehensive, in-depth and sincere exchange of opinions" on issues related to the establishment of a new DPRK-U.S. relationship and building a lasting and robust peace regime on the peninsula, the joint statement said.

They agreed to commit to establishing new DPRK-U.S. relations "in accordance with the desire of the peoples of the two countries for peace and prosperity."

The statement said the two leaders are convinced that the establishment of new DPRK-U.S. relations will contribute to the peace and prosperity of the Korean Peninsula and the world, and recognize that mutual confidence building can promote the denuclearization of the peninsula.

Pyongyang and Washington will join their efforts to build a lasting and stable peace regime on the peninsula, according to the joint statement.

Reaffirming the Panmunjom Declaration, which South Korean President Moon Jae-in and Kim signed after the third inter-Korean summit on April 27 at the border village of Panmunjom, the DPRK agreed to commit to working toward complete denuclearization of the Korean Peninsula, it added.

Pyongyang and Washington also agreed to commit to recovering the remains of prisoners of war and those missing in action during the 1950-53 Korean War, including an immediate repatriation of those already identified.