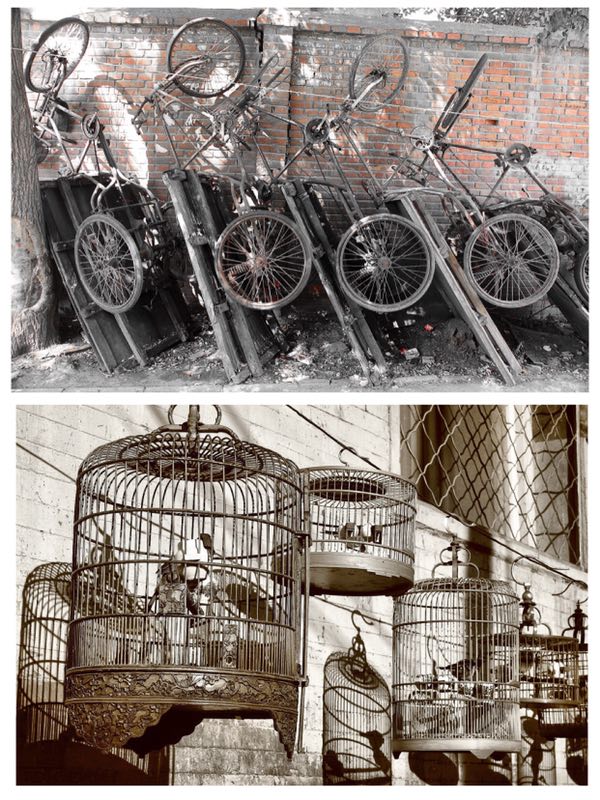 In the 1990s, while traveling through Beijing toward southwest China I would always spend a few days increasing my knowledge of the city’s many hidden gems. Regularly the names “Qianmen-Dashilar” appeared in my diary notes from those days — an area I discovered to be bustling with street life while retaining much of the capital's local cultural attributes.

While staying at Beixinqiao I would meander through hutong alleys leading to Yonghegong metro station. Twenty minutes later at Qianmen, a cafe overlooking the massive Zhengyangmen Gate complex, I ate breakfast, sat at the window and dreamed — dreams of Beijing, the area I was in and its many facets and episodes within the city’s long story. It was hard to imagine a canal once flowed through where I sat, but the local name West Heyan Street, or West Riverbank Street, remains as testimony.

The arched passageway through Zhengyangmen and Jianlou (Arrow Tower) is on the city’s historic axis line. It continues south along pedestrianized Qianmen Dajie, which until 1965 was known as Zhengyangmen Street. Qianmen refers to the “Front Gate” of the Ming Dynasty walls separating the imperial grandeur of the north from the vibrant, at times chaotic scenes of urban life in the south. Through the mid-2000s it remained a busy route, regularly clogged by diesel-powered buses from a now long-removed bus depot. But now, the gardens around Jianlou have since turned the area green. 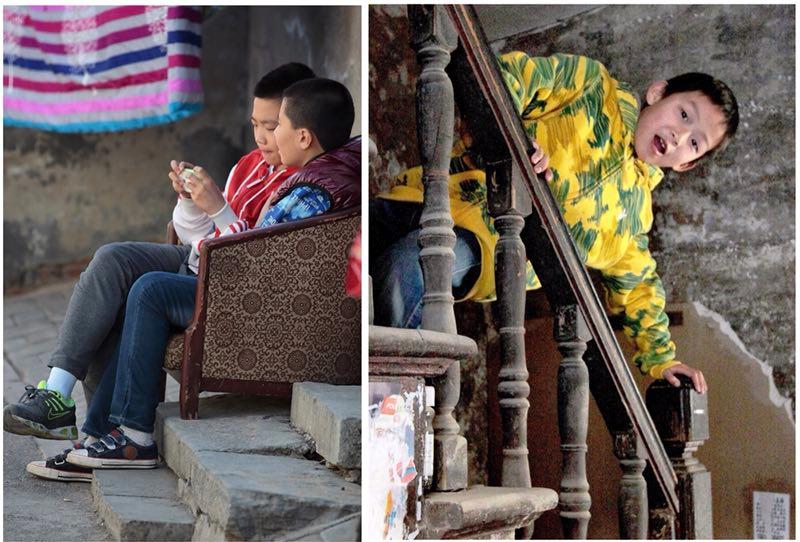 Children of the alleys 2015. (Photo by Bruce Connolly/chinadaily.com.cn)

It was south along that route the emperors would be carried towards the Temple of Heaven for ritual ceremonies but it was also through the Jianlou passageway where officials and their families would emerge into the bustling areas of Qianmen and Dashilar, as commerce and entertainment were extremely scarce or non-existent within the palace or its surroundings.

From the cafe at Qianmen it was also possible for me to look across to the clock tower of the former Zhengyangmen Railway Station — the original “Beijing station” located just southeast of the massive gate. Operating between 1901 and 1959, it connected the city with coastal Tianjin and the northeast to Shenyang. The rail terminus helped generate commerce, and an elementary transport infrastructure centered around rickshaws and streetcars. There was even a suburban rail service around the city walls. Today, the station building is home to the China Railway Museum. 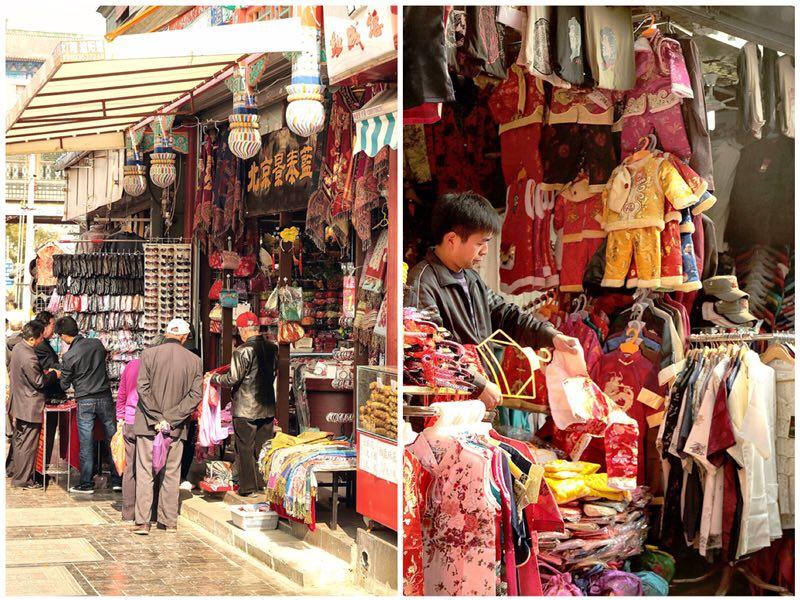 Next door, on Qianmen East Street, the Beijing Planning Exhibition Hall is worth visiting simply to view the large floor model of the city. But you can also see where Qianmen is in relation to the greater city, and be amazed at the haphazard layout of the alleys and lanes spreading southeast and southwest of Qianmen. This area is different from the more organized layout of hutong alleys to the north around Dongsi, Xisi and Zhonggulou, which regularly feature grand courtyard houses or siheyuan. Beijing’s narrowest alley, Qianshi or “money market” Hutong, is only 40 centimeters wide at its narrowest point. During the Qing it was the center of monetary exchange, with 26 mints producing copper coins for the city’s banks. Qianmen, particularly its western side, was home to several of China’s early financial houses — indeed, walk along West Heyan Street and there are several large European classical-style monetary buildings dating from late 19th to the early 20th century. Some have seen recent restoration work. A fascinating area to walk through late at night, when the streets are deserted. Often I would sit at my breakfast cafe pondering over maps, wondering where to walk and explore. The area east of Qianmen Dajie provided, at that time, fascinating discoveries through areas of mainly low-rise residential and commercial buildings, including the “Underground City” — a maze of anti-nuclear evacuation tunnels that were open to visitors at that time, some converted into gift shops or workshops. 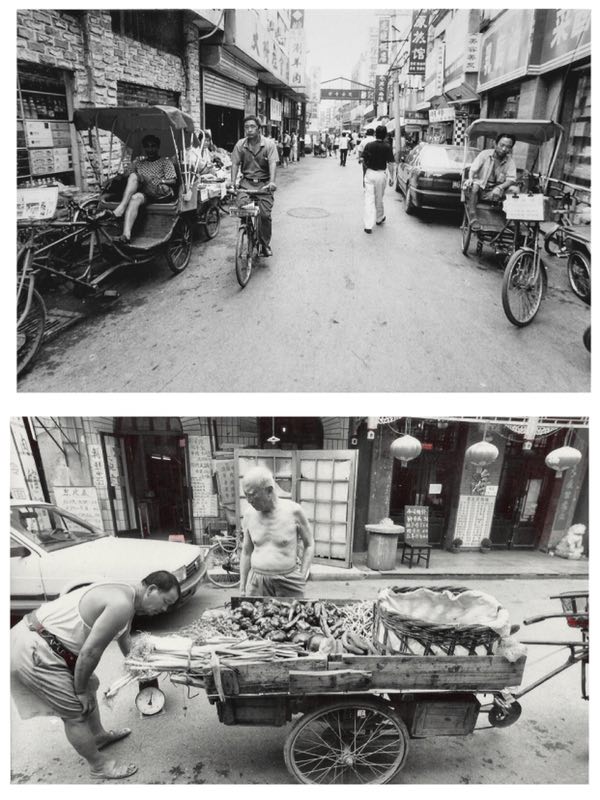 However my preferred areas for walking have always been west of Qianmen Street. Since the Ming Dynasty, Dashilar was a major center for commercial activities. Today the main shopping street is visited by crowds of tourists looking for its famed “Time Honored Brands” — shops renowned for their hats, silks, foodstuffs, traditional pharmacies and so on. It also boasts China’s first cinema, Daguanlou, dating back to 1905. The cinema still operates, featuring a sculpture of the father of Chinese cinema, Ren Qingtai. I often took visitors to the Neiliansheng Shoe Shop. Photographs show how it was popular with leaders including Chairman Mao Zedong, Zhou Enlai and Deng Xiaoping. Established in 1853 during the Qing Dynasty by two high ranking officials, its prestige meant wearing these shoes one could get promoted in the Qing Imperial Court.

Meishi Street, running south from Qianmen to Zhushikou West Street, dates from 2008 and was modified to carry southbound traffic away from now-pedestrianized Qianmen Street. Heading west takes the intrepid explorer to some of the best areas for discovery. Several years ago, Dashilar West Street was pedestrianized into a commercial lane and home for local produce rather than the large historic stores found eastward on Dashilar Street. 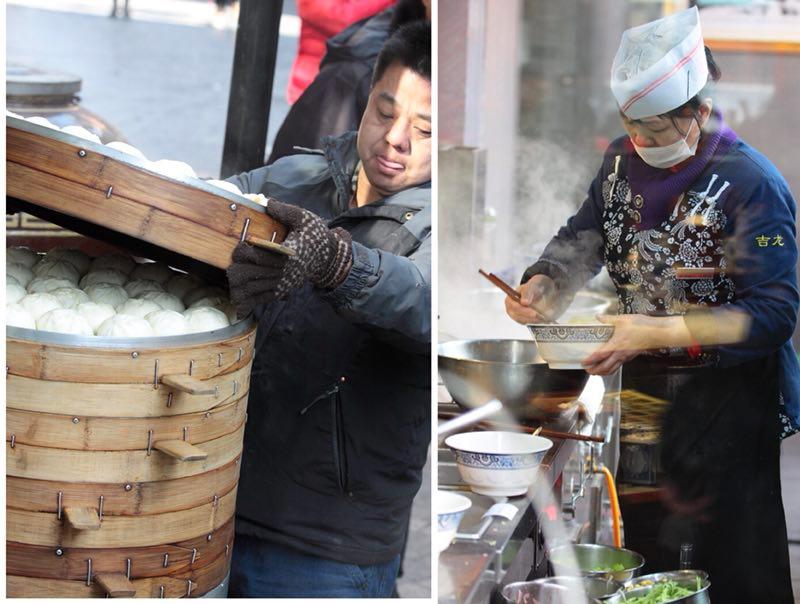 Food is a popular attraction around Dashilar 2015. (Photo by Bruce Connolly/chinadaily.com.cn)

Simply leaving the main byway can lead into alleys lined with two-floor brick buildings or small factories from the mid-20th century. If only buildings could talk — there would be many colourful legends and stories going back to the latter days of the Qing Dynasty. Its uniqueness has seen its increased use as a location during the annual Beijing Design Week. Indeed, Dashilar is being seen by travel guides like Lonely Planet as becoming a ”hip” neighborhood. This is due to some of the area’s local-style Art Deco buildings becoming centers for contemporary art, fashion and design. Galleries and smart cafes are appearing alongside hostels popular with overseas backpackers and travelers, people who prefer to spend time in local areas filled with reminders of past eras rather than more suburban fashionable hotels.

Considerable work has gone into improving the appearance of Yangmeizhu Byway. One cafe boasts an upstairs terrace offering excellent views over the surrounding rooftops, while looking down on the variety of domestic and Western architectural styles standing side-by-side through this neighborhood. One delight has been to be present when the local Tan’er Hutong Elementary School finishes for the day. With alleys too narrow for cars, students often go home by bicycle carts, while others crowd into local shops for snacks. Indeed, Tan’er leads to north-running Yanshou Street, which is lined with many neighborhood food and household goods stores. It is an image of life from a different era in Beijing's history, and for a photographer, a place to capture many precious moments in time of people going about their daily lives. 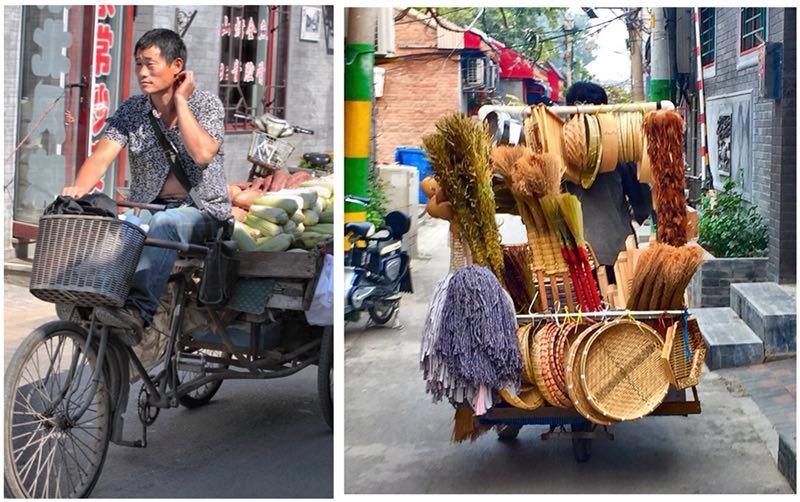 Today the Qianmen-Dashilar area remains as a small enclave within the greater area of Beijing, but its many surviving, twisting, irregular alleys share many stories. Areas near the southwestern end of Tieshu Byway near Xinhua South Street reminded me more of a village within a city, where pigeons with whistles attached would fly in formation overhead. It was where I could stay all day with my camera watching people push bamboo prams while schoolchildren played on three-wheel carts alongside older residents engaged in chess or card games. I felt the warmth of ordinary people, and some commented on my fascination with these scenes of everyday life.

This is the most satisfying part of street photography — the people who make this one of the most fascinating parts of old Beijing to explore, and where we will return at a later date with more stories and images of this great city. 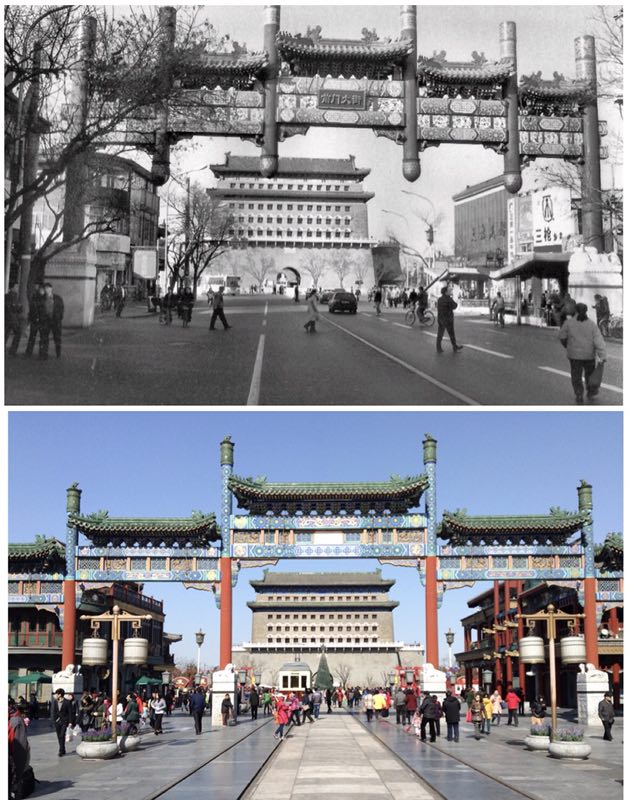 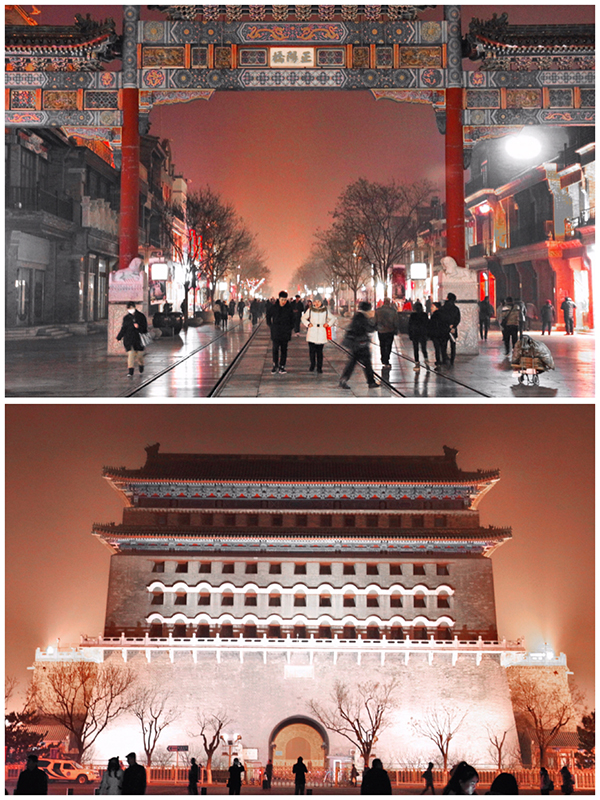 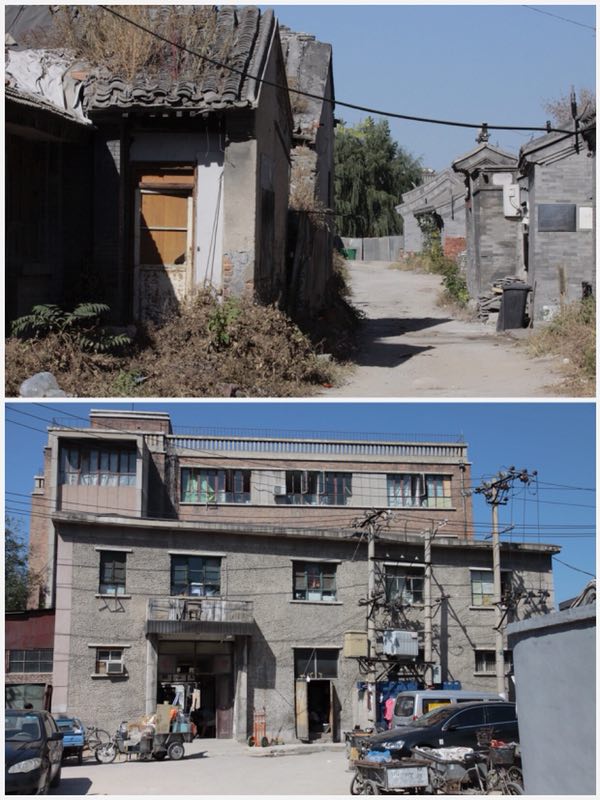 Reminders of the past - former homes and former factory buildings in eastern Qianmen 2015. (Photo by Bruce Connolly/chinadaily.com.cn) 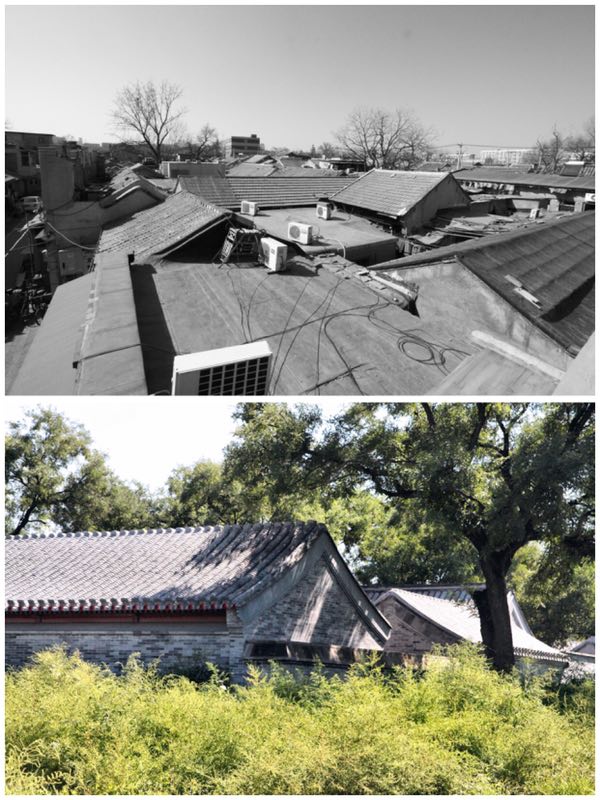 Rooftops and traditional buildings of Dashilar and Qianmen 2015. (Photo by Bruce Connolly/chinadaily.com.cn) 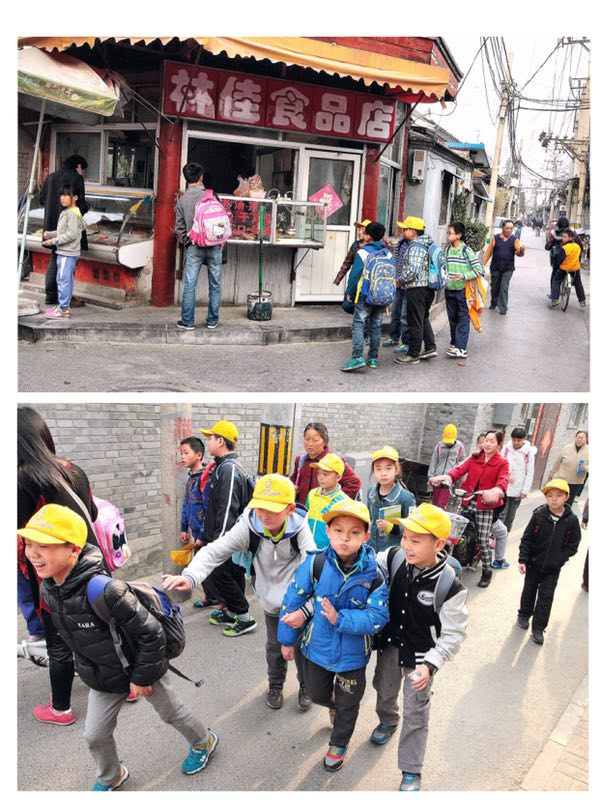 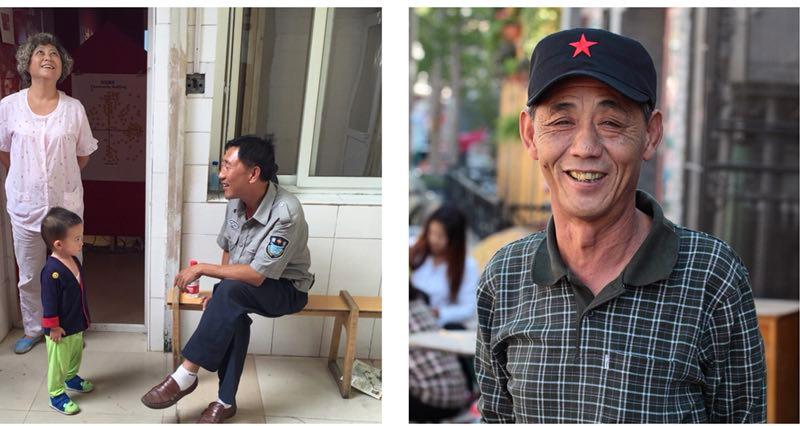 The security man and vistor to Dashilar 2015. (Photo by Bruce Connolly/chinadaily.com.cn) 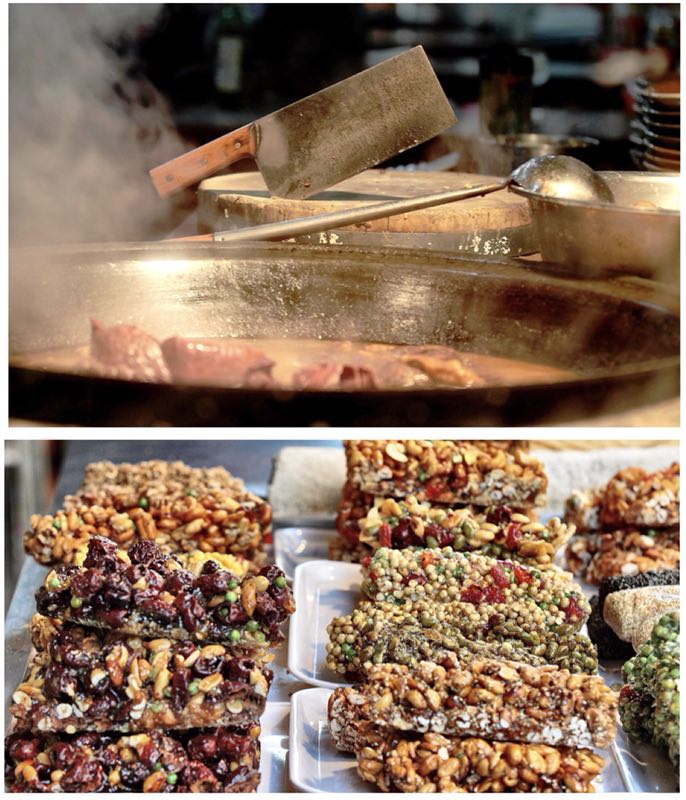