Images of Peppa Pig on zebra crossing mired in controversy 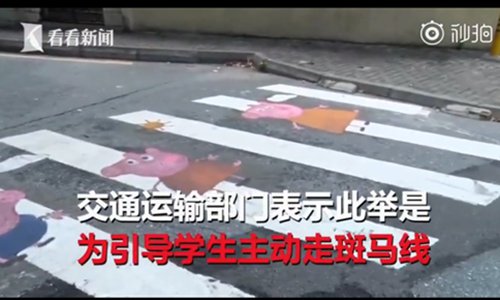 Images of Peppa pigs are painted on the zebra crossing outside the primary school. (Screenshot photo)

In order to encourage primary school pupils to use zebra crossings when they cross the road, the traffic control department in Shenzhen, South China's Guangdong Province painted images of Peppa Pig on a zebra crossing outside a local primary school.

Peppa Pig is a very popular animation show among children in China, so these images do attract primary school pupils. "I like it. Peppa Pig brings so much fun to me," one of pupils told the kankanews.com, a video news website.

Some residents also support this idea. "I think they look very adorable and can make our city more beautiful," a resident said.

However, parents had opposite views. They are worried about their children's safety when they cross the road.

"These cartoon characters might attract too much attention of the children and cause them not to concentrate on passing cars, which is so dangerous," a father expressed his concern to the media.

Drivers also disagreed with the department's decision as they think that children might stop in the middle of the road to appreciate the colorful pictures, which will cause traffic jams.

According to a video posted by the Knews, similar cartoon characters have also been painted on zebra crossings in the US, but the US government banned them after related accidents had been reported.