Drawing on the myths of the past(1/7) 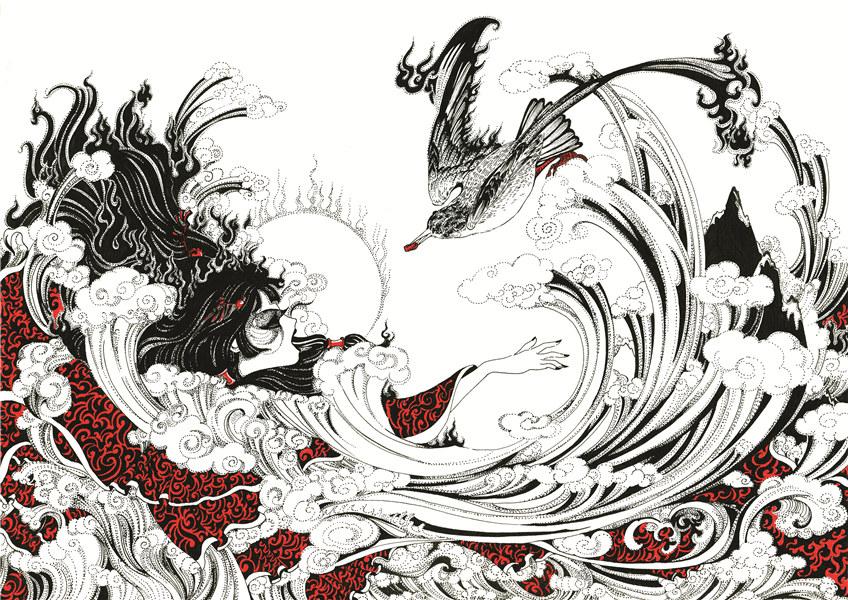 Should the mythical creatures recorded in the ancient Shan Hai Jing (Classics of Mountains and Seas) ever cross paths with their Western counterparts, such as those seen in Fantastic Beasts and Where to Find Them series, for example, they would be no less magnificent-as was demonstrated in Crimes of the Grindelwald, when a zouwu manifested itself quite spectacularly in Paris.

The ancient Chinese classics, estimated to date back more than 2,000 years, describe zouwu as large as a tiger, colorful and with a tail longer than its body, which was able to travel thousands of miles a day.

Later documents suggest that it moved elegantly and swiftly and was so kindhearted that it could not bear to tread on the grass and only fed on animals that died a natural death.

In fact, many recent domestic fantasy movies, TV series, cartoons and games have drawn inspiration from Shan Hai Jing, while a growing number of picture books on it have been published. 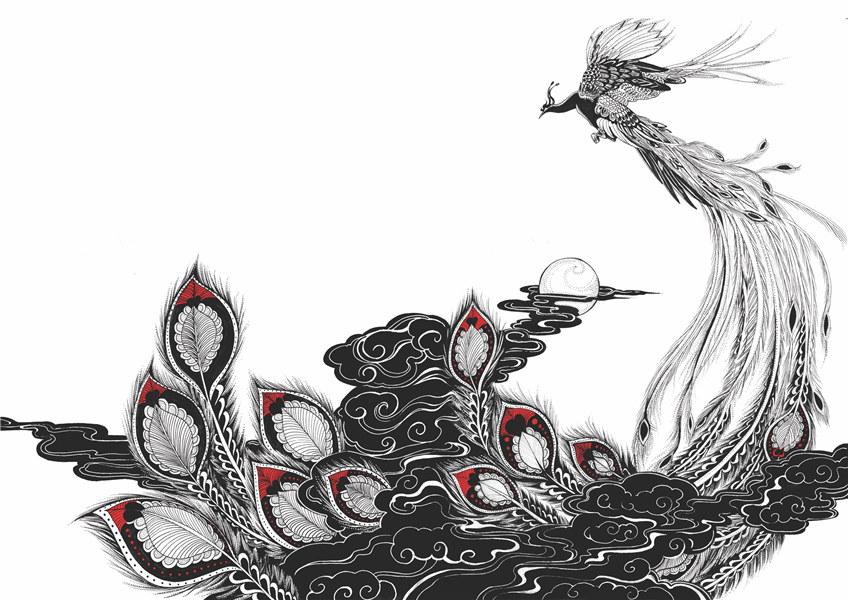 Born in 1984, Chen Siyu is one of those illustrators who has been interpreting the view of the mythical creatures with a renewed sense of imagination and in her own particular painting style.

Chen's homonymous picture book is a combination of techniques spanning the modern and the traditional and blending elements from the East and West.

Apart from the academic benefits of Chinese history, folk customs and archaeology, Chen values the curiosity and imagination embodied in the classics most of all.

"Shan Hai Jing has provided us, the ordinary readers, with an alternative perspective of the world and stoked the imagination of our minds already equipped with a knowledge of science and technology," she said at a lecture in May, held at her alma mater, the Academy of Arts and Design at Tsinghua University in Beijing. 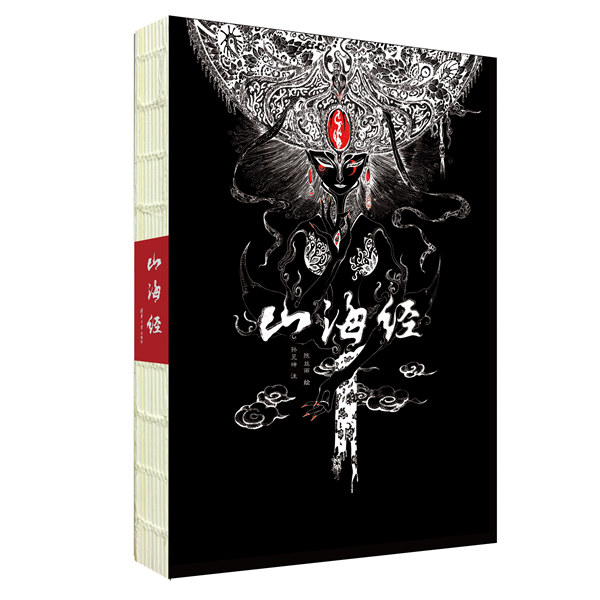 The cover of the picture book Shan Hai Jing (Classics of Mountains and Seas) illustrated by Chen Siyu. (Photo provided to China Daily)

Many of the well-known ancient myths and legends, like Kuafu chasing the sun, Jingwei's reclamation, and Kings Gun and Yu taming the flood, were written down in the book, to some extent conveying some of the moral spirit that the ancient Chinese people were striving for, namely lofty ambition, resolute determination in the face of hardship, fearlessness and selflessness.

People nowadays will not have the chance to glance at the earliest versions of Shan Hai Jing, nor the original illustrations of the earliest surviving version-which was annotated by Jin Dynasty (265-420) scholar Guo Pu.

Chen's picture book was, at first, part of her graduation project at Tsinghua back in 2006 and was later expanded to include more than 100 illustrations between 2013 and 2014. 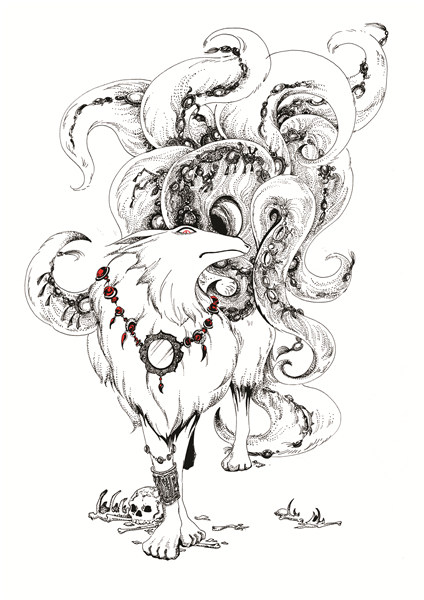 Upon first seeing a ragged volume of the ancient classics in the university library, she was astonished by its mysteries. Feeling inspired, she tried to draw a fish with wings, the start of a series reimagining what had been recorded in that tatty old book.

Her medium of choice is usually needle pen drawings. She then scans the drafts and colors them using imaging software, such as Adobe Photoshop.

Her drawing style has been influenced by the way British illustrator Aubrey Beardsley (1872-98) reproduces intricate detail and magnifies the contrast between black and white, which is reflected on the cover of her book which portrays the legendary figure, Xiwangmu, or Queen Mother of the West.

Although Xiwangmu is sometimes depicted as good-looking and tender in some literary, film and television adaptations-even being written into a romantic tryst with a human king-in the original book, she is considered fierce, and with her leopard's tail and tiger's teeth, she embodies the characteristics of the supposed mistress of plagues and corporal punishment. 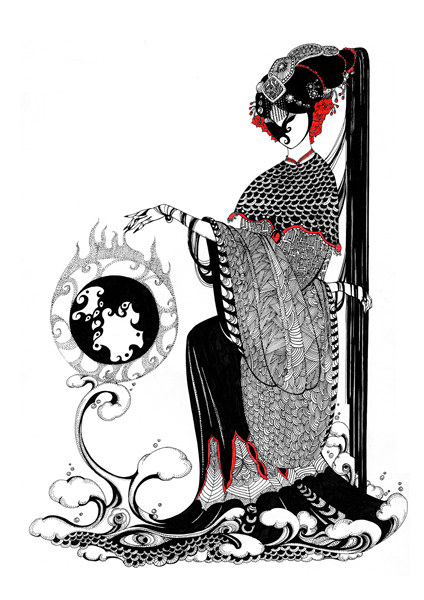 Leaving out the tail and teeth, Chen tried to emphasize some of her main traits, such as wild hair, all-seeing eyes and a beguiling human appearance, dealing with the figure in a way that conforms to modern readers' aesthetics.

Beardsley's influence can also be seen in the decorations on Xiwangmu's headwear, while her hands and gestures borrow more from Buddhism and the cloud patterns are, according to Chen, inspired by thangka, a traditional form of Tibetan painting.

Additionally, she only renders her work in black, white and red, largely because she was fond of, and once used to copy lacquer paintings from the Han Dynasty (206 BC-AD 220), which were often painted in vermilion on black lacquer backgrounds. 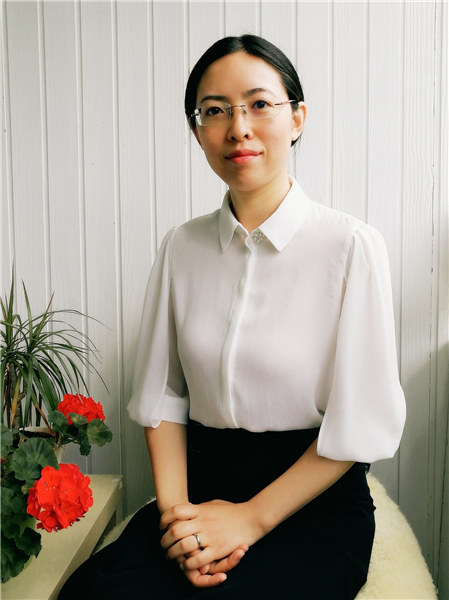 The illustrator herself. (Photo provided to China Daily)

She pays great attention to expressions, personalities and the aura of her characters, especially the portrayal of their eyes and poses.

She has also taken on the challenge of reshaping and differentiating them in a rational and artistic way, considering the fact that many characters' bodies are often an amalgamation of human qualities and the animal forms which people remain familiar with today.

Illustrations are introduced to reflect and sublimate the meaning of the text, Chen says.

Mainly, she created a mental image of the creatures based on the original texts, eliminating references from ancient paintings, in order to give the classics a modern, fresh look and in her own language of painting.

"She has a rich imagination and doesn't rely much on references when drawing. It's all in her mind," says Wang Hongwei, her mentor at Tsinghua.

Chen went to the School of Visual Arts in New York City to obtain her second master's degree after graduating from Tsinghua and now lives in Germany. 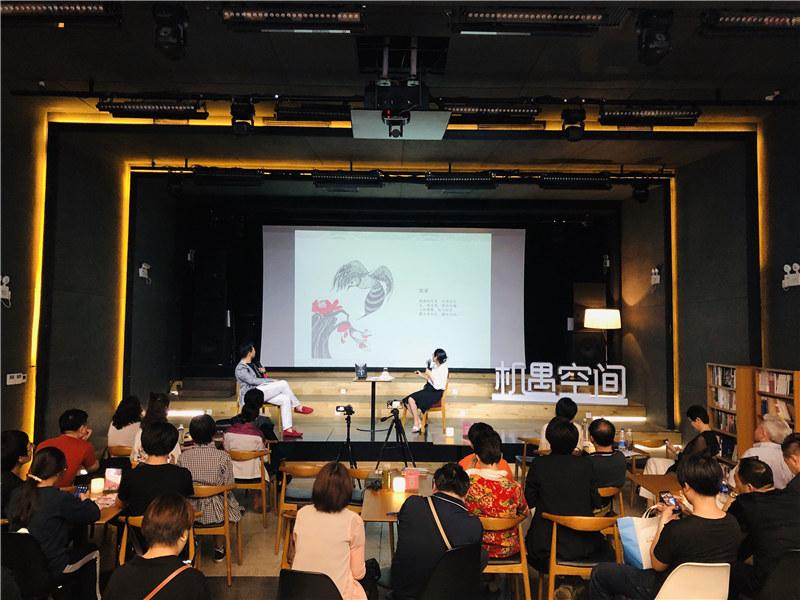 Chen talks about how the original classics inspired her work during a lecture held in Beijing's 798 Art Zone on May 26. (Photo provided to China Daily)

Before turning her focus on illustrating classic Chinese texts, she worked as a commercial illustrator.

Her picture book on Shan Hai Jing has been reprinted 21 times and has so far sold around 400,000 copies.

According to Zhang Lihong, one of the book's editors, the text in the book was annotated by Sun Jiankun, an aficionado of ancient Chinese classics, while geographical references, including the location of the mountains and the distances between them, were taken from the work of the late historical geographer Tan Qixiang.

A hardcover edition is in the works, which will feature an additional eight illustrations.

Last year, Chen published a new picture book based on Chu Ci (The Verses of Chu), which was mainly written by ancient poet Qu Yuan ( 3 4 0-2 7 8 BC), and she is currently working on a graphic version of Shi Jing (The Book of Songs), an ancient Chinese collection of poems.

"Ancient Chinese culture has its own unique attraction. What I've done is to enable more young people to rediscover its charm," Chen says.