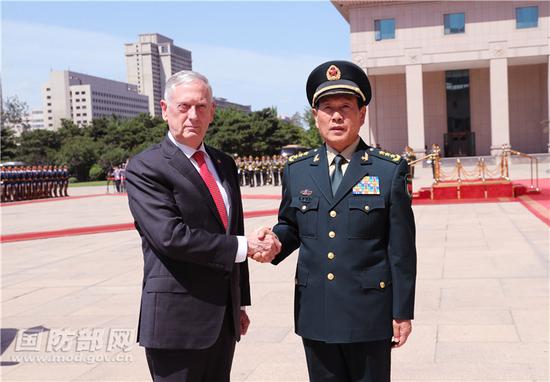 U.S. Defense Secretary James Mattis' visit to Beijing was "positive and constructive" despite the two countries holding different opinions over some security issues, a Ministry of National Defense spokesman said on Thursday.

He said the mutual visits between high-ranking military officials were called for in a consensus reached by the top leaders of both countries last year.

Mattis' three-day visit, which concluded on Thursday, was "positive and constructive", Wu said.

Although there are different opinions over some issues, both sides still share many common interests, Wu said. "China is willing to work with the U.S." to broaden common interests and "manage our differences properly".

"We would also like to maintain the overall trend of mutual respect and win-win cooperation and make Sino-U.S. military relations a stabilizing factor for bilateral relations."

Mattis' visit came amid rising tensions between the two countries over issues regarding the South China Sea and Taiwan. On June 19, the U.S. Senate passed the 2019 National Defense Authorization Act, calling for joint military drills with Taiwan.

Any attempts to play the Taiwan card are doomed to fail, Wu said in response to a question regarding the act. "We hope the U.S. side will carefully deal with the Taiwan question, and not shoot itself in the foot."

"Wei's upcoming visit to the U.S. will be beneficial in maintaining high level strategic dialogues, and building mutual trust and respect between the two militaries," he said.

Meeting with Mattis on Thursday morning, General Xu Qiliang, vice-chairman of the Central Military Commission, said that China will not claim the land of other nations, nor will it tolerate losing even an inch of homeland that is inherited from ancestors.

Mattis said Sino-U.S. cooperation has been a historical trend, and the two countries' military relations play a significant role in bilateral ties.