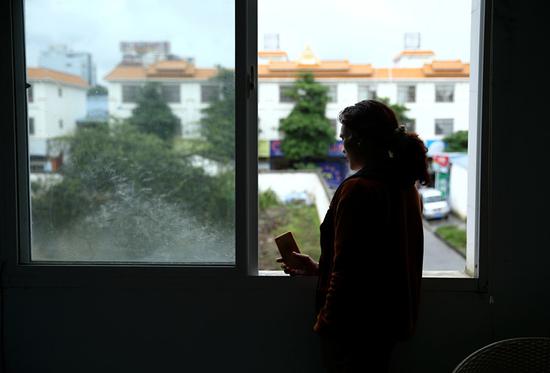 A woman from Myanmar who is married to a Chinese man attends the Better Clinic in Ruili, Yunnan Province. (ZOU HONG/CHINA DAILY)

Patients from Myanmar benefiting from treatment in Yunnan province

At least 19 people were killed when a gunbattle broke out early on May 12 in Muse in Myanmar's northern Shan state. The next morning, Ma Li climbed out of the shelter dug beside her home, crossed the Myanmar-China border and arrived at her workplace, an AIDS clinic in Ruili, Yunnan province.

At the Better Clinic, Ma, who speaks both Chinese and Burmese, the official language of Myanmar, serves as an interpreter and HIV/AIDS intervention outreach worker, particularly for the clinic's dozens of patients from Myanmar.

Ma, 53 and an ethnic Chinese from Myanmar, is a patient there herself. She began antiretroviral treatment in 2007 while serving a 12-year prison sentence for cross-border drug trafficking in Kunming, the capital of Yunnan.

Released in 2013, she returned home to Muse, which sits across the border from Ruili, and had her treatment referred to the Better Clinic, a 20-minute journey by electric motorcycle from her home.

She said the clinic gave her life-saving therapy and, more important, a meaning for the rest of her life - to help, in particular, needy patients from Myanmar and to contain the AIDS epidemic across the border.

Ma became a full-time worker at the clinic two years ago and has crossed the border for work ever since.

As part of her job, each week she and her colleagues deliver clean needles for intravenous drug users on both sides of the border.

"They are normal people, but I became scared by some carrying big knives," she said. "I feel good helping the left-behind people, as I was one myself many years ago."

Ma prides herself on once saving a drug user by promptly giving him a naloxone injection. Naloxone is a drug therapy that reverses the effects of opioids.

Located on the second floor of the Guomen Community Health Center in Ruili, the Better Clinic treats 132 AIDS patients including 43 Myanmar nationals, according to Zhang Lin, its operations manager.

"These patients, including Ma Lu, are given the same service as the 89 Chinese patients at the clinic," she said.

Apart from free drugs, the patients are given follow-up checks, including CD4 tests for immunity levels and viral load, which measure the effectiveness of the treatment, all funded by the Chinese government.

Yi Keke, from a village in Namhsan, Shan State, said, "The free treatment helps me settle down here and move on with life."

The 36-year-old looks like a Chinese except for the white Thanakha powder on her cheeks - a plant-based cosmetic popular with women in Myanmar to make the skin smooth and cool.

She lives with her Chinese husband and 6-year-old son in Ruili. The couple began treatment at the clinic when they were diagnosed with HIV/AIDS three years ago.

Every three months, Yi, who now works at a local restaurant, comes to the clinic for a new supply of drugs and a medical check-up. "I am doing well with the drugs, except for occasional insomnia," she said. The couple now makes about 2,000 yuan ($300) a month, with 400 yuan spent on rent.

Ten years ago, she left her hometown for Ruili to seek better employment. Back home, she was employed as a farm worker and made less than 10 yuan a day.

There were many more job opportunities back then with fewer immigrants from Myanmar, she said.

In Ruili, she has only a handful of friends, and Zhang Lin is one of them.

"Lin is nice to me and helped me through the tough early days when I first began the treatment," she said.

Every time she receives a new supply of drugs, Yi says she places them in a black plastic bag so that others cannot see them. She also said she hid her HIV status from others, even friends from her hometown.

Zhang said that in recent years more young women from Myanmar, especially from poor regions with frequent violence, have married Chinese and moved to Ruili.

Since the late 1990s, Ruili, a major crossing point between China and Myanmar that has prospered with cross-border trade, has attracted a rising number of nationals from Myanmar for business and job opportunities.

The county-level city in Dehong prefecture, Yunnan, has 200,000 residents, with 50,000 from Myanmar, according to Li Zhoulin, a researcher at the Center for Disease Control and Prevention in Ruili.

Due to the lack of a sound intervention system, HIV/AIDS is spreading in Myanmar, and only a small proportion of those infected are aware of their status, according to the World Health Organization.