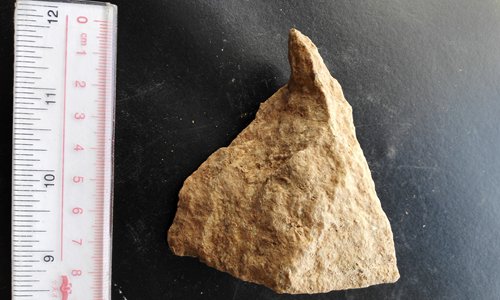 One of the stone tools excavated in Shangchen historical site in Northwest China's Shaanxi Province. It was chipped to this form by human ancestors 2.1 million years ago. (Photo/courtesy of Zhu Zhaoyu)

Stone tools found in Northwest China prove that hominids, primate ancestors of humans, may have lived on China's Loess Plateau 2.1 million years ago, breaking the widely recognized theory that the first ancient humans outside Africa appeared in Georgia.

The tools excavated from the newly found Shangchen site in Shaanxi Province show that the earliest hominid activity in the area "appeared around 2.1 million years ago, 270,000 years earlier than the widely recognized earliest hominid site in Dmanisi," Zhu Zhaoyu, leading geologist for the project, and researcher at the Guangzhou Institute of Geochemistry under the Chinese Academy of Sciences (GIGCAS), told the Global Times on Thursday.

It was believed by most researchers that humans originated in today's Africa and left their homeland around 1.85 million years ago, which coincides with the age of the hominid fossils discovered from Dmanisi, Georgia, in the Caucasus region of Eurasia, according to nature.com.

The Shangchen site contains 17 artifact layers that extend from paleosol, dating to approximately 1.26 million years, to loess, dating to about 2.12 million years. A total of 96 stone tools were excavated, 82 of which exhibit obvious signs of use, which "can only be caused by human activities," said Zhu.

Though no hominid fossils were found during the excavation, which would reveal the owners of those tools, the discovery still leaves scientists a new research question: Which hominid species first left Africa? "This is a whole new paleo ball game," nature.com quoted William Jungers, a paleoanthropologist at Stony Brook University, as saying.

Most of the stone tools were found in the relatively warm and wet ancient soil layers, with a few also discovered in the dry and cold loess layer, between which exists an 850,000-year gap, which indicates that ancient humans may have repeatedly lived on the Loess Plateau, if not continuously, for hundreds of thousands of years, and also provides important clues to the living environment of ancient humans, CAS said.

Loess study is the best indicator of climate conditions in ancient times, and a field in which "China leads the world," Zhu said, adding that the combination of geological investigation on loess and anthropological research is a prominent research direction, and the Shangchen findings are eminent in both fields.

The research program was initiated by GIGCAS with help from more than 10 domestic and overseas research institutes, including the University of Exeter in the UK, sciencenet.cn reported.

The layers found might not even represent the earliest hominid, according to John Kappelman, one of the paper's referees.

There are still two layers at the site dating to 2.58 million years ago that have not yet been explored, and the investigation "is expected to continue," according to Zhu.

Zhu added that as more and more findings emerge and prove the existence of human activities in areas other than Africa, the widely believed theory that humans originated in Africa could possibly be reconsidered in future.