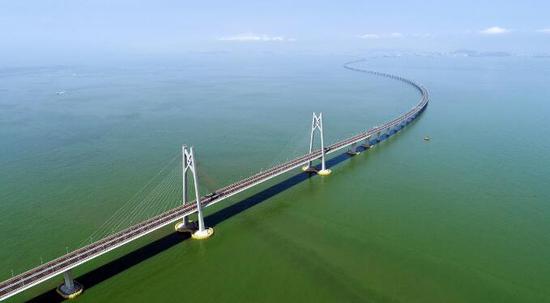 Guangdong province in South China has vowed to deepen reform and opening-up in economic development, and to further expand cooperation with Hong Kong and Macao, to speed up the development of the Guangdong-Hong Kong-Macao Greater Bay Area in the new year.

"Reform and opening-up has been the key measure for Guangdong's fast and steady economic growth in previous decades, and Guangdong should open up even wider to the outside world in the years to come," the provincial government said in a statement released after an economic work conference held in late December.

Ma Xingrui, governor of Guangdong, has urged the relevant cities and departments in the province to utilize the major historical opportunities brought by the Guangdong-Hong Kong-Macao Greater Bay Area.

He called on them to deepen reforms and opening-up to join hands with their counterparts in Hong Kong and Macao, in order to further improve the Bay Area's international competitiveness in advanced manufacturing through scientific and technological innovation.

"Meanwhile, Guangdong will further promote the integration and development of industry, finance, science and technology among the cities in the Bay Area," Ma said earlier at a meeting with local entrepreneurs in Guangzhou, the provincial capital.

He said he expects that cooperation with the Hong Kong and Macao special administrative regions will help Guangdong to become a new international innovation center and a major transport hub, by further improving the infrastructural links with the SARs in the years ahead.

Meanwhile, Liang suggested cities in Guangdong should adhere to a harmonious and coordinated development pattern, in order to complement each other's advantages in the Bay Area and to avoid development overlaps.

"Guangdong cities that are expecting to become international financial centers can first choose to become a green bond exchange center or carbon emission trading center, areas that are neglected by many other leading global financial cities," he said.

"Actually, not all the cities can become world financial centers," he added.

Guangdong, long considered a window of China's reform and opening-up, has led economic development on the mainland for three decades. The province is expected to achieve an annual GDP growth rate of about 7 percent in 2018.

According to statistics from Guangdong Customs, the province's foreign trade volume came to 6.53 trillion yuan in the first 11 months of 2018, up 7 percent year-on-year.

In addition to Hong Kong and Macao, the Greater Bay Area includes the Shenzhen and Zhuhai special economic zones, and the cities of Guangzhou, Foshan, Dongguan, Zhongshan, Huizhou, Jiangmen and Zhaoqing, all in Guangdong.