'Marquis of Haihun' relics site to open to public 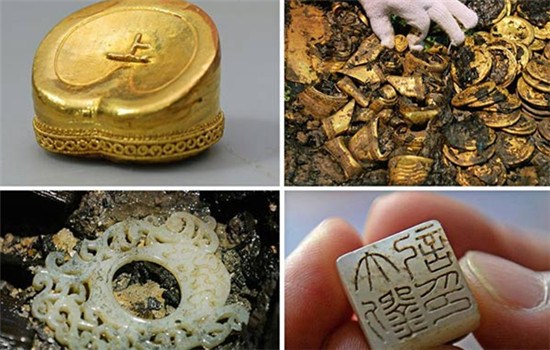 A hoof-shaped ingot, gold cakes, a jade seal and a jade pendant are unearthed from the Haihunhou tomb. (Photo/Xinhua)

An ancient cemetery housing the tomb of the Marquis of Haihun, whose excavation was among the most significant archaeological work in China in recent years, will open to the public by the end of next year.

A project kicked off on Wednesday to preserve the relics site and make it accessible to public visitors, according to the management bureau of the site.

The marquis tomb, located near Nanchang in east China's Jiangxi Province, is one of the few imperial tombs that has not been looted. It dates back to the Western Han Dynasty (206 B.C.- 25 A.D.).

The excavation of the tomb began in 2011. The remains of Liu He, known as the Marquis of Haihun, were found in a coffin in an interior chamber and removed in January 2016 for further research. More than 10,000 artifacts have been unearthed from the tomb so far.