13 bodies retrieved after bus plunges into river in Chongqing 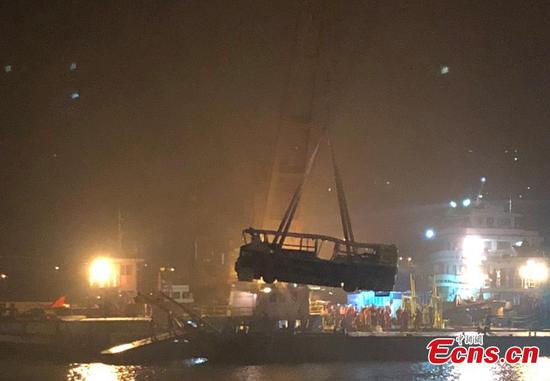 Rescuers on Wednesday night salvaged the wreck of a bus that plunged into the Yangtze River in Chongqing Municipality leaving at least nine people dead.

A total of 13 bodies have been retrieved after a bus plunged into a river in southwest China's Chongqing Municipality on Sunday, local authorities said Thursday.

The bodies have all been identified, but two others remain missing.

Rescuers on Wednesday night salvaged the wreck of the bus from the river. The bus was pulled out of the water by a floating crane at about 11:30 p.m.

The bus had veered onto the wrong side of the road and collided into an oncoming car before breaking through road fencing and flying off a bridge in Chongqing's Wanzhou District on Sunday.

A previous investigation found that 15 people including the driver were on the bus.