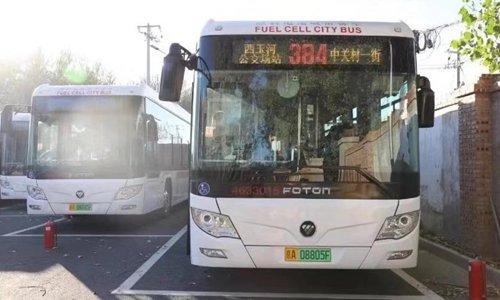 A line 384 bus. This is the only line that uses a hydrogen powered fuel cell in Beijing. (Photo/Courtesy of UNDP)

China is thinking of replacing gas-powered cars with fuel cell vehicles powered by hydrogen to combat air pollution and save energy, experts said on Thursday.

The fuel cell vehicles are powered by hydrogen, making them reportedly more efficient than conventional internal combustion engine vehicles with no tailpipe emissions. They emit water vapor and warm air.

China's Ministry of Science and Technology and the United Nations Development Programme (UNDP) have been jointly implementing a Global Environment Facility-funded project that utilizes this innovative solution to help mitigate the impact of climate change.

Devanand Ramiah, a UNDP deputy country director, told the Global Times on Thursday that "we have launched a pilot program in five cities including Beijing and Shanghai. Three hydrogen-powered buses served during the 2008 Olympic Games and another six were used at the Shanghai World Exposition in 2010."

Promoting hydrogen vehicles could also help poorer rural areas as hydrogen could also be generated from re-forming ethanol that can be extracted from farm crop residue such as sugar-rich straw, Zhang said.

But hydrogen is flammable, sparking safety worries. Hydrogen is classified as a hazardous chemical substance in China, Zhang said, meaning that under the current regulatory framework, building new hydrogen fuel stations is not as easy or smooth as building fossil fuel stations.

A total of 777,000 new-energy vehicles were sold in the Chinese market last year, up 53.3 percent year-on-year, the Xinhua News Agency reported, citing the China Association of Automobile Manufacturers.

"China is studying relevant research for when to stop the production and sale of traditional fuel cars," Wang Cheng, an official at the China Automotive Technology and Research Center, told the Global Times.