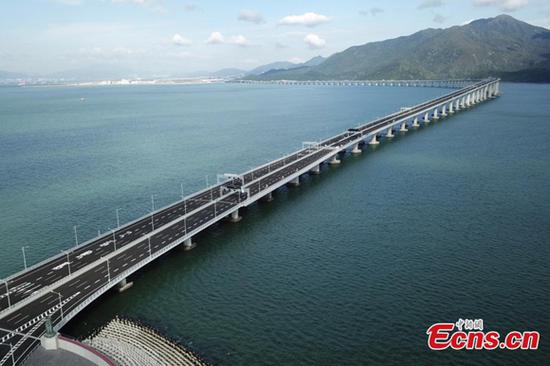 On his personal blog, Cheung said the governments of Guangdong, Hong Kong and Macao are now summing up experiences and working toward the bridge's official opening.

More than 300 government personnel from Hong Kong participated in the trial operation and business people engaged in cross-border transportation were also invited to the event, he said.

The bridge is the first cross-border link connecting the land of the three cities, and the opening means that the western part of the Pearl River Delta will be accessible from Hong Kong within a three-hour drive, Cheung said.

The new bridge will significantly reduce the cost and time of passenger and freight transportation by land and accelerate the economic development and linkage of the cities in the Greater Bay Area, he said.

Spanning 55 kilometers, the bridge is the world’s longest bridge-and-tunnel sea crossing and will cut travel time between Hong Kong and Macao from three hours to just 30 minutes.