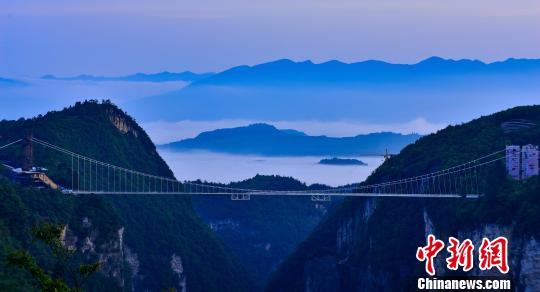 The news was announced by the institute on Wednesday.

The IBC annually recognizes individuals and projects of distinction, with seven awards in honor of distinguished engineers who have had a significant impact on the bridge engineering profession worldwide. The medal is awarded for a single recent outstanding achievement in bridge engineering demonstrating innovation in special use bridges such as pedestrian, people-mover, or non-traditional structures, according to IBC.

Located in Zhangjiejie National Forest Park of Central China’s Hunan Province, the bridge linking two mountain cliffs has scored a number of world records. It measures 430 meters in total length and 6 meters in breadth, and is suspended about 300 meters above the ground. When it opened in 2016 it was the longest and tallest glass bottomed bridge in the world.

In addition to the achievement, Xu Gongyi, deputy chief engineer of BRDI, also won the IBC John A. Roebling medal, awarded for lifetime achievement in bridge engineering. He is also the youngest winner of this distinguished award.

Xu has been engaged in bridge design for 30 years and acted as the main designer for over 50 big bridges in China, winning a number of domestic and international awards.