Marble fragments of sculpture from Yuanmingyuan returned to original site 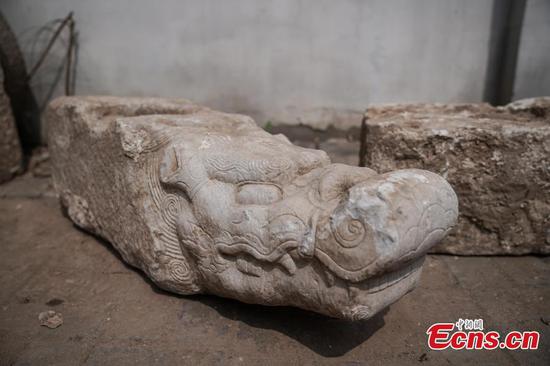 Four white marble building pieces are transported from the Qinghe Sub-district Administration Office in Haidian District, Beijing to the Older Summer Palace for preservation, June 12, 2018. The four cultural relics were found at a construction site in 2017, and experts believe they were originally part of buildings in the Old Summer Palace, a garden for the royal family during the Qing Dynasty (1644-1911) that was known as the "garden of all gardens" for its architectural diversity. (Photo: China News Service/Cui Nan)

Four white marble fragments of a sculpture from Yuanmingyuan, also known as the Old Summer Palace in Beijing, were returned to the area on Tuesday.

The four fragments are part of the head of a chi, a mythic animal which is a type of Chinese dragon.

Two residents from Qinghe in Haidian district noticed them in early 2017 at a construction site and reported the matter to the authorities.

The fragments were returned to the park after experts from the Yuanmingyuan Ruins Park and the Beijing Stone Art Museum recently confirmed the four fragments came from Old Summer Palace.

Yuanmingyuan, an imperial resort for Qing Dynasty (1644-1911) emperors, was burned down by invading Anglo-French forces in 1860.

Separately, in April, two stone fragments, which featured calligraphy by emperors, were returned to the park from the courtyard of the Chinese Democratic League central committee.

According to Li Bo, the head of administration at the Yuanmingyuan Ruins Park, more than 40 items had been returned to the park in the recent years, and a special display area will be created to showcase them.

"The inferno of Yuanmingyuan is a national pain for the Chinese," says Li. "So, artifacts from Yuanmingyuan always attracted wide attention. And returning such artifacts is often seen as a material symbol of the rejuvenation of the Chinese nation."