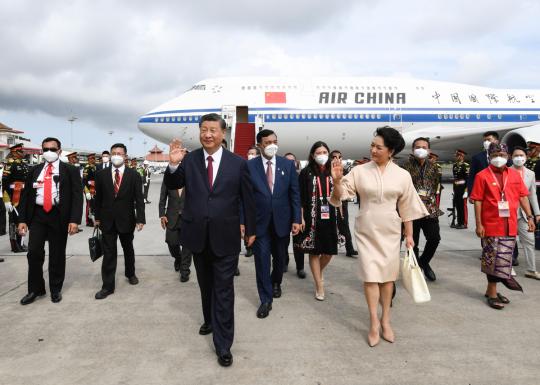 President Xi Jinping and his wife, Peng Liyuan, arrive on Monday at I Gusti Ngurah Rai International Airport in Bali, Indonesia, for the 17th Group of 20 Summit. ）Photo/XINHUA）

As leaders of the world's largest economies convene in Bali and Bangkok this month, officials and analysts have predicted that Asia, especially East Asia and China, will play a greater role in championing improved global governance.

Bali, Indonesia, will host the G20 Summit and Bangkok, Thailand, will host the Asia-Pacific Economic Cooperation Economic Leaders' Meeting, at which global leaders will deliberate on some of the most pressing issues the world faces: spillovers of the Ukraine crisis, the COVID-19 pandemic and a potential global economic recession.

Lili Yan Ing, lead adviser at the Economic Research Institute for ASEAN and East Asia, a think tank in Jakarta, said G20 leaders have the responsibility to take the necessary actions to address global challenges.

Ing said that the leaders should give priority to economic recovery including debt restructuring, particularly for low- and medium-income countries, waivers on trade-related aspects of intellectual property rights for vaccines and lifesaving medicines, and mitigating the scarring effects of the pandemic.

She also stressed the importance of ensuring that digital transformation will provide benefits and minimize the unintended consequences on less skilled and less educated workers, and promote the switch to green energy.

She said Asia, particularly East Asia, is heading in the right direction on global governance.

"We understand world challenges; we embrace the multilateral system; we're putting effort into improving our people's welfare by increasing trade and investment (among others through the Regional Comprehensive Economic Partnership); we are taking more responsibility in the global community; and we are taking part in solving global problems," she said.

"And the most important thing is that we are rising peacefully."

China has done that over the past 40 years, Ing said, and lifted 800 million people out of poverty while making a key contribution to global governance.

"Not only that, China (not only the government, but also its society) has put a lot of effort into developing its human capital. China has also invested in infrastructure and recently in energy transition."

China is part of the G20 Debt Service Suspension Initiative for the poorest countries and the agreement on the extension of the initiative. The country ranks first among G20 members in terms of the amount of debt of the poorest countries it has deferred, according to China's Foreign Ministry.

Ma Zhaoxu, vice-minister of foreign affairs, said China, as an important member of the G20, has always been active in global economic collaboration and governance and has worked to promote sustainable and balanced growth in the global economy.

He reiterated China's support for Indonesia, the holder of the rotating presidency of the G20, saying that China looks forward to the summit playing a constructive role in enhancing international collaboration on fighting COVID-19, promoting world economic recovery and safeguarding food and energy security.

Zhu Feng, dean of Nanjing University's School of International Studies, said it is important for G20 members to coordinate their responses and reinforce collaboration on various fronts as the global economy faces the prospect of a recession.

A key factor contributing to global stability and lifting the world's economic outlook, Zhu said, is how the U.S. and China, the world's largest and second-largest economies, respectively, and members of the G20 and APEC, manage their differences and put bilateral relations back on a healthy footing.