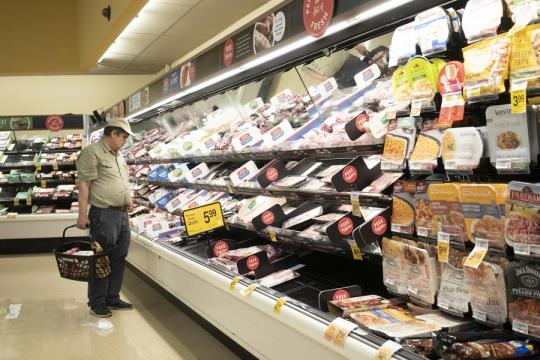 A customer shops at a supermarket in Millbrae, California, the United States, Aug 10, 2022. (Photo/Xinhua)

The U.S. government's policies toward China are putting the country on the wrong track, according to China watchers who stress that a decoupling of the top two economies will harm the United States and the rest of the world.

The administration of U.S. President Joe Biden has essentially maintained the hawkish stance toward China of his predecessor, Donald Trump, in an effort to deflect criticism by blaming China for the country's economic difficulties, said George Koo, a retired international business adviser in Silicon Valley, and Cyrus Janssen, a U.S. video blogger focusing on China, in an episode on the latter's YouTube channel.

"They are looking to blame somebody for all the problems that we have, that we're not fixing, and China is the most obvious target to blame, because of the economic growth that is happening in China," said Koo.

"One single thing that the Democratic and Republican parties can agree on is to bash China and blackmail China's image. That's a very sad thing."

Koo said the U.S. government's approach toward China is "self-destructing".

"We are insisting on pushing China's head underwater, so we can still be on top," he said. "That's a losing proposition, because sooner or later, they're gonna get out from under and be on top anyway.

"In the meantime, we've lost all the time and opportunity to create a more competitive position for ourselves."

Instead of investing in domestic development, the U.S. government is investing in weapons and increasing the military budget in the name of "promoting democracy all around the world", said Koo.

The business figure's comments struck a chord with Janssen, who lived in China for a decade.

"And there's this amazing thing where you do see China's government trying to pass policies that are in the best interest of its citizens. You've seen that in its economic rise over the last 50 years," he added.

By contrast, much of the U.S.' foreign policy is "emotional-based" and "very reactionary", Janssen said. He pointed to the U.S.' moves toward economic decoupling from China, in an effort to combat the rise of an economic competitor.

Janssen, who also advises international companies, said many people are concerned about the trend toward decoupling and have asked him if all U.S. factories will pull out of China.

"It's almost impossible, though certainly some industries have moved out," he said. "For example, textiles have moved to Vietnam and other countries in Southeast Asia. But we've had so many American companies that have invested tens and hundreds of millions of dollars building these factories."

General Motors went to India to try to open up a vehicle plant only to find it didn't work out from the infrastructure and the logistical standpoint, said Janssen.

"China was just so much better. And it was so much easier to be doing business in China. So they eventually closed that plant in India and moved back to China," he said.

Koo said that what the U.S. government is asking the companies to do is like "cutting their noses off to spite the American face".

Citing the last quarterly report of Lam Research, a major equipment company based in Silicon Valley, Koo said 31 percent of its business is in China and 8 percent in the U.S..

"Ostensibly, we're asking this company to stop selling to China. If you cut yourself off from the 31 percent of the business, you're really asking the company to shut down," he said.

Koo said it's important for people in the U.S. to understand that working with China is potentially an all-around win-win situation that benefits everybody, given the integration of the economies and the complementary nature of each country's skills and strengths.