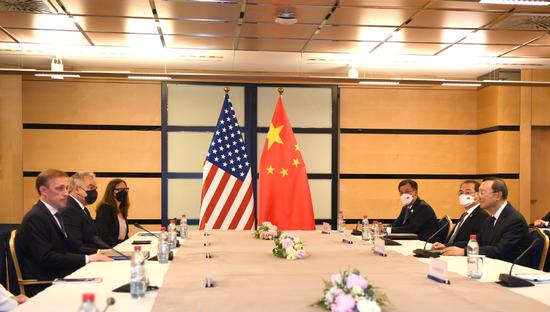 Yang Jiechi (1st R), a member of the Political Bureau of the Communist Party of China (CPC) Central Committee and director of the Office of the Foreign Affairs Commission of the CPC Central Committee, meets with U.S. National Security Advisor Jake Sullivan (1st L) in Luxembourg, on June 13, 2022. (Xinhua/Ren Pengfei)

The two sides conducted candid, in-depth, and constructive communication on China-U.S. relations, as well as other issues of common concern.

The two sides agreed to follow the important consensus reached by the two heads of state, step up contact and dialogue, reduce misunderstanding and miscalculation, and properly manage differences. Both sides agreed that maintaining unimpeded channels for communication is necessary and beneficial.

Yang, also director of the Office of the Foreign Affairs Commission of the CPC Central Committee, noted that U.S. President Joe Biden has repeatedly told Chinese President Xi Jinping that the United States does not seek a new Cold War or aim to change China's system, nor will it oppose China through strengthening alliances, support "Taiwan independence," or intend to seek a conflict with China. The Chinese side attaches high importance to these statements, he said.

For some time, however, the U.S. side has been insisting on further containing and suppressing China in an all-round way. Such acts, instead of helping the United States solve its own problems, have plunged China-U.S. relations into a very difficult situation and severely damaged the exchanges and cooperation in bilateral areas, Yang said, stressing that such a situation conforms neither to the interests of the two sides nor other countries of the world.

China-U.S. relations are at a critical crossroads, noted Yang, saying that the three principles proposed by President Xi -- mutual respect, peaceful coexistence, and win-win cooperation -- are the correct approaches for China and the United States in getting along with each other, as the principles conform not only to the fundamental interests of the Chinese and the Americans, but also to the common aspiration of the international community. They ought to be fundamental rules for developing China-U.S. relations.

The Chinese side is ready to work together with the U.S. side to explore ways and methods to realize this vision, yet China firmly opposes using competition to define bilateral ties, Yang said.

He said the U.S. side should correct its strategic perceptions of China, make the right choices, and translate President Biden's commitments into concrete actions, working together with the Chinese side in the same direction and concretely implementing the important consensus reached by the two heads of state.

Yang stressed that China takes an unambiguous and steadfast stand in safeguarding its national sovereignty and territorial integrity. China's internal affairs brook no interference by other countries, and any attempts to thwart or undermine China's national unity are doomed to fail, he said.

The Taiwan question concerns the political foundation of China-U.S. relations which, unless handled properly, will have a subversive impact, said the senior Chinese diplomat. The risk does not only exist but will escalate as the United States attempts to contain China with the Taiwan question, and as the Taiwan authorities rely on the United States to seek its "independence," he added.

The U.S. side should not have any misjudgments or illusions, Yang said, adding that it must abide by the one-China principle and the stipulations in the three China-U.S. joint communiques and handle the Taiwan question in a prudent and proper way.

He stressed that the U.S. side ought to have benign interactions with the Chinese side and make concerted efforts in promoting prosperity, stability, and development in the Asia-Pacific region.

The two sides also exchanged views on international and regional issues such as Ukraine and the Korean Peninsula nuclear issue.