Archaeologists examine a sacrificial pit at the Sanxingdui site in Guanghan, Sichuan province, in May. More than 3,100 cultural relics have been recovered from six such pits at the site since 2020. (Photo by XIANG YU/FOR CHINA DAILY)

Cultural relics that are more than 3 millennia old and feature previously unknown shapes were recently found during an archaeological excavation in the Sanxingdui site in Sichuan province, and they appear to be a mysterious yet key part of ancient Chinese civilization.

Ran Honglin, a leading archaeologist on the project, said in a news conference on Monday in the Sanxingdui Museum in the city of Guanghan that 3,155 cultural relics in complete structure－including 1,238 bronze wares and 543 gold and 565 jade artifacts－were recovered from six pits on the site.

Including broken parts and fragments, a total of 13,000 relics offered new clues to the ancient civilization of Shu. The ancient state of Shu dominated what is today's Sichuan province, but documentation on the state is insufficient.

The Sanxingdui site, discovered in 1929, has been key to unveiling the brilliance of the state lost in history.

In 1986, two pits full of bronze artifacts, notably bizarre-looking masks and human figurines, were accidentally found in Sanxingdui, drawing worldwide attention to the site. They are now generally thought by archaeologists to have been used for sacrificial ceremonies.

In the latest round of excavations, which began in 2020, another six "sacrificial" pits were found next to the original pair. 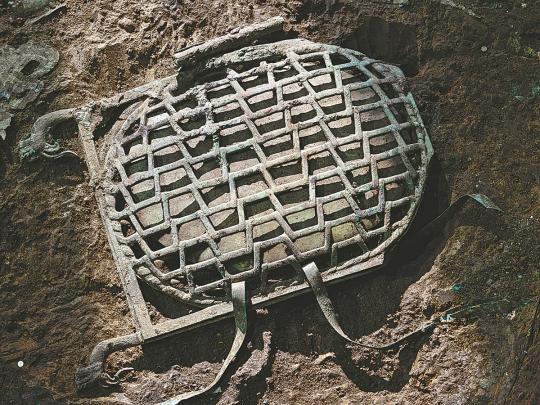 A piece of metalware is among the relics. (Photo/Xinhua)

Ran, who is from the Sichuan Provincial Cultural Relics and Archaeology Research Institute, said new carbon-dating results on about 200 relics in the pits showed they dated from 1131 to 1012 BC, about 3,200 to 3,000 years ago, during the late period of the Shang Dynasty.

"The question of its age, which had been bothering us the past 30-some years, has been solved," Ran said.