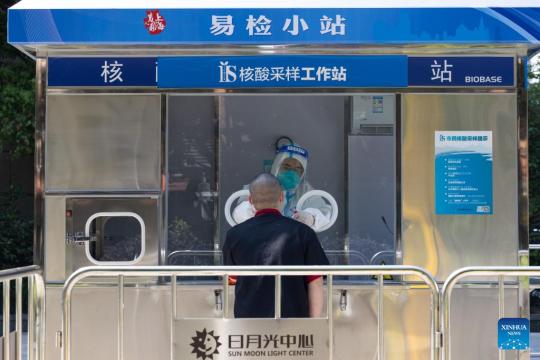 A medical worker takes a swab sample from a man for nucleic acid test in Huangpu district, East China's Shanghai, on May 8, 2022. (Photo/Xinhua)

The locally transmitted COVID-19 infections in Shanghai are mainly from family gatherings and some public venues, including a downtown salon and a supermarket in a commercial area, a health official in the city said on Sunday.

Zhao Dandan, deputy director of the Shanghai Health Commission, said at a news conference that the number of infections related to Red Rose Beauty Salon in Xuhui district, where three workers were first identified as having been infected on Thursday, has risen to 15－10 workers, four close contacts of workers and a customer.

Also, 16 infections were found to have been to a Suning supermarket in the Wujiaochang commercial area of Yangpu district, Zhao said.

"There is an increase in the number of infected people working in the service industry as various service sectors resumed business on June 1 (when the city lifted most epidemic prevention and control measures) and staff and customer mobility increased," Zhao said.

He explained that there are several reasons for the rising number of infections this month. They included that some infections stemmed from during the 14-day incubation period of the novel coronavirus after June 1, and some others could have contacted objects contaminated by the virus.

Shanghai has registered more than 60 locally transmitted COVID-19 infections scattered in most of its districts so far this month. On Sunday, the city reported one local confirmed case and four asymptomatic infections outside of quarantine and locked-down communities.

The city is under heavy pressure to reduce the spread of the epidemic and prevent a rebound in cases after infections emerged in areas bordering downtown Huangpu, Jing'an and Xuhui districts.

Lai Xiaoyi, an inspector with the Shanghai Commerce Commission, said that apart from some restaurants in the suburban districts of Jinshan, Fengxian, and Chongming, all others must only provide takeout service.

"We ordered workers in catering, beauty and hairdressing, as well as housekeeping sectors to undergo daily nucleic acid tests. Couriers delivering food must take both nucleic acid and antigen tests once daily," she said.

Shanghai also announced on Saturday that all residents must undergo nucleic acid tests at least once a week, and those who do not will be assigned a yellow health code, meaning such individuals will not be allowed into most public venues.

The government said the requirement will remain until at least July 31, and the normalized nucleic acid test sites in the city will extend their services for free until then.

On Saturday, an investigation team in Shanghai released the results of an investigation into the COVID-19 outbreak related to Huating Hotel, a quarantine hotel in Xuhui district where 62 individuals tested positive in March.

Six district officials and seven people related to the management of the hotel were punished for mismanagement and negligence. Among them, two deputy heads were removed from their posts, and the directors of the district health commission and the district civil affairs bureau were dismissed.

The investigation found institutional loopholes in the management of the quarantine hotel and the neglect of close-loop management, which led to workers getting infected and the spread of the virus into the community.