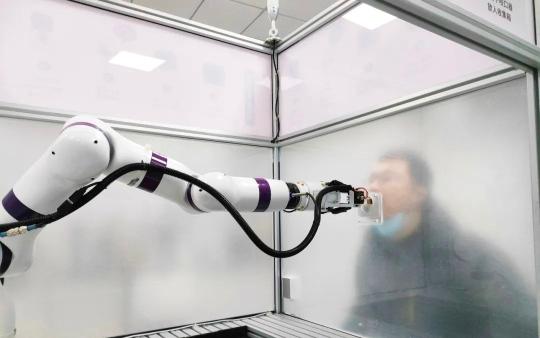 This type of robot is mainly applied to 10-in-1, 20-in-1 mixed sample collecting tasks for nucleic acid detection. It can automatically complete tasks such as registration code scanning and throat swab sample collecting, packaging and preserving.

Consisting of a seven-jointed robotic arm and a "small steel hand" that can grab cotton swabs, the sample collecting robot is a combination of 22 invention patents and 6 authorized patents and it can operate smoothly in 0-45 ℃ environment, according to Zhao.

After sample preservation, the robot also has disinfection and sterilization abilities to avoid cross infection, a staff member informed via a video clip on the official website of Tsingke Research Institute, who developed this robot with Tsinghua University.

The sample collecting process takes around 35 seconds per person each time and the sampling effective rate can reach 100 percent. The application of this type of robot can significantly reduce the work intensity and infection risk of nucleic acid sampling personnel.

Currently, research for the fourth generation of this robot is in full swing with a focus on an integrated detection function so sample collection and detection can be completed by the same machine within 30 seconds, said Lv Chunzhe, head of Tsingke Research Institute, as reported on the institution's official website.