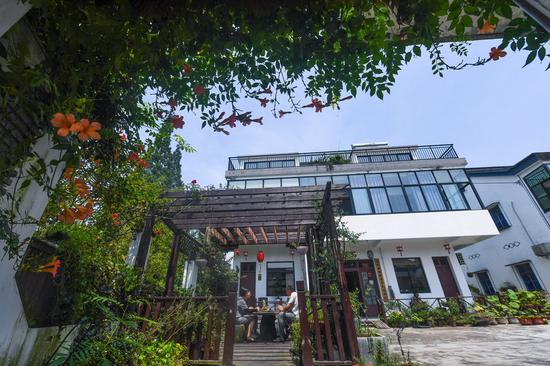 People enjoy themselves at a homestay in Xincang village of Haining city in Jiaxing, East China's Zhejiang province, Aug 26, 2021. (Photo/Xinhua)

China is expected to advance coordinated regional development amid its efforts to pursue common prosperity, as balanced development among regions is a prerequisite of the goal, which is an essential requirement of socialism and a key feature of Chinese-style modernization, according to experts.

They said the nation has already rolled out a comprehensive set of detailed, top-level strategies to provide a clear path for achieving coordinated regional development.

An article by President Xi Jinping, which was published on Saturday in Qiushi Journal, the flagship magazine of the Communist Party of China Central Committee, said the country has entered a stage in which concrete steps should be taken to promote common prosperity.

It is necessary to prevent polarization and eliminate unfair distribution while protecting legal income in accordance with the law, the article said, calling for reasonably adjusting excessive incomes, improving the individual income tax system and better regulating capital gains.

The article was based on Xi's speech to the meeting of the Central Committee for Financial and Economic Affairs on Aug 17, which called for adhering to a people-centered development philosophy and promoting common prosperity while pursuing high-quality development.

The country will pursue increasingly balanced development among regions through further development, according to the outlines of the 14th Five-Year Plan (2021-25) for national economic and social development and the long-range objectives through 2035, which was unveiled in March.

In a keynote speech via video link to the leaders' summit of the 15th meeting of the Conference of the Parties to the Convention on Biological Diversity held in Kunming, Yunnan province, last week, Xi announced that China will continue to readjust its industrial structure and energy mix, vigorously develop renewable energy, and make quicker progress in planning and developing large wind power and photovoltaic bases in sandy and rocky areas and deserts.

The first phase of the energy projects, with an installed capacity of approximately 100 million kilowatts, has recently smoothly started construction, the president said.

Jia Ruoxiang, a senior researcher at the National Development and Reform Commission's Institute of Spatial Planning and Regional Economy, said Chinese authorities have outlined clear paths for coordinated regional development and substantial progress is expected in the coming years on narrowing the development and income gaps among different regions, as well as between rural and urban areas.

The difference in development levels has expanded between the eastern and western regions, as well as the southern and northern regions, according to a study published on the website of the NDRC, China's top economic planner.

From 2010 to 2019, the gross domestic product gap between eastern and western China expanded from 15.06 trillion yuan ($2.34 trillion) to 30.6 trillion yuan, while the ratio of the western region's GDP to the eastern region increased from 0.35 to 0.4, according to the study.

Northern China accounted for 35.3 percent of national GDP in 2019, dropping 8.1 percentage points from 2010, and the ratio of southern China's GDP per capita to the northern region increased from 0.95 to 1.31 over the same period.

Tax revenue is China's main source of fiscal revenue. With the differences in development, the eastern region contributed more than 60 percent of China's tax revenue during the 13th Five-Year Plan (2016-20) period, while the gap between central and western regions' fiscal revenue and expenditure was quite noticeable.

Economic development of a region is directly powered by industrial development, and after years of hard work China's less-privileged regions have made great progress in upgrading industrial structures. However, they need to attach more priority to innovation and industrial optimization, to drive sustainable growth with greater competitiveness, the experts said.

For instance, the Inner Mongolia autonomous region, the country's major coal hub in the north, tops the nation with installed new energy capacity of about 50 million kilowatts.

Officials of the autonomous region said they will accelerate the establishment of a new energy supply system that features efficient and comprehensive use of multiple forms of energy, in order to increase utilization of renewables and gradually reverse the coal-centered energy mix.

Fan Hengshan, a regional development economist and former deputy secretary-general of the NDRC, said the central region should pioneer high-quality development backed by modern manufacturing. It should also leverage its advantages to build an energetic and distinctive industrial structure with strengths in sectors such as grain production, energy raw materials and equipment manufacturing.

Jia, with the NDRC research institute, suggested that authorities build more platforms to strengthen cooperation between eastern and other regions, so that interregional or intraregional cooperation and production flows are enhanced. This would result in stronger and closer ties among different regions to form optimized and deeply integrated national industrial and value chains.

"The nation's efforts to form a strong domestic market will create better conditions for labor, capital and other production factors to flow freely among different regions, which will help foster economic strengths and new development impetus in accordance with different development levels and the resource endowment of each regional economy," he said.

Those efforts include reforms to delegate power, streamline administration and optimize government services, and negative-list-based approaches for market entry, Jia said. A negative list refers to special administrative measures for the access of foreign investment in certain industries or areas.

The eastern region has already achieved high-level social and economic development and could be a demonstration model for other regions in pursuing common prosperity, he said.

The business community is also bullish about capitalizing on the development potential set to be unleashed by the increase in coordinated regional development.

Liu said his company has "seen rising growth opportunities in China's future development, as the country is ramping up efforts to steer development toward a new stage of balanced and coordinated growth."

United Kingdom-based pharmaceutical giant AstraZeneca has also been establishing regional headquarters across the country to align its development strategy with China's national agenda.

Its newly unveiled Western China Headquarters in Chengdu, Sichuan province, is the first headquarters set up by a multinational pharmaceutical company in the western region, and will be responsible for AstraZeneca's operations, management, sales and marketing in 10 provincial-level regions.

By establishing five regional headquarters, which are expected to be in place by the end of the year, AstraZeneca aims to promote local integration, boost the innovative capacity of the regional pharmaceutical industry, and unleash the potential of local economic development, the company said.