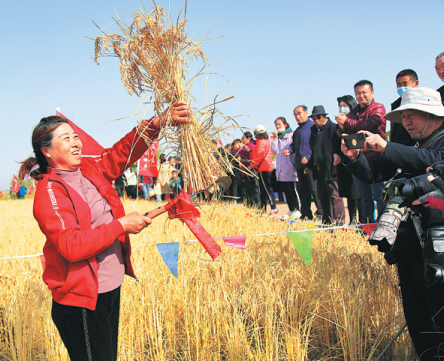 A farmer demonstrates the use of a sickle in rice cultivation at an event in Zhangye, Gansu province, on Saturday, on which the 41st World Food Day was celebrated. （CHEN LI/CHINA NEWS SERVICE）

By completing the building of a moderately prosperous society in all respects, as well as going on to implement the rural vitalization strategy, China has made and will continue to make contributions to food and nutrition security globally, officials from China and abroad said.

Under the leadership of the Communist Party of China, which celebrates the centenary of its founding this year, Chinese people have successfully addressed the problem of supplying sufficient food and clothing, which has bothered them for centuries, and have made the historic transformation from pursuing the goal of "having enough food" to the new target of "having better food", said Zhang Wufeng, head of the National Food and Strategic Reserves Administration.

"A national food security strategy has been established since the 18th CPC National Congress in 2012 to strengthen China's abilities in food production, reserves and distribution, which has provided strong support to completing the building of a moderately prosperous society in all respects," he said.

Zhang made these remarks in a speech on Saturday at an event in Wuhan, Hubei province, celebrating the 41st World Food Day and China's National Food Security Publicity Week.

The event was organized jointly by the National Food and Strategic Reserves Administration and other government agencies, including the ministries of agriculture and rural areas, education, technology and sciences.

The theme of this year's World Food Day is: "Our actions are our future. Better production, better nutrition, a better environment and a better life".

Carlos Watson, representative in China and the Democratic People's Republic of Korea of the United Nations Food and Agriculture Organization, said in a speech at the event that the theme was chosen to remind people that the world is not on track to ending hunger and malnutrition in every form by 2030. One in 10 people－up to 811 million in total－had difficulties in feeding themselves every day last year, he said.

Such a situation calls for a transformation toward sustainable agri-food systems, he said, as well as consensus and concrete actions from all.

In terms of taking actions, Watson said he has seen China's goals of its rural vitalization strategy being carried out, which strive to build rural areas with "thriving businesses, a pleasant living environment, social equity and civility, effective governance and prosperity".

He said he was pleased to notice that this year's National Food Security Publicity Week in China adopted the theme of "Developing the food industry, supporting rural vitalization".

With the implementation of the rural vitalization strategy during the 14th Five-Year Plan (2021-25) period and beyond, "We are looking forward that China will embrace a stronger, more upgraded, innovative and sustainable food industry in the country, which will not only benefit the Chinese people, but also contribute greatly to global food and nutrition security, as it did over the past decades," Watson said.

Zhang said China will take more steps in the future to further ensure food security in China, and, meanwhile, promote a healthy, stable and sustainable development of the international food supply.

Such measures will include implementing a high-quality domestic food project that will improve the production, purchase, reserves, processing and sales of food; carrying out food-saving campaigns, which will help form a good environment of cherishing food throughout society; and speeding up the legislation of food security and to facilitate more international cooperation.