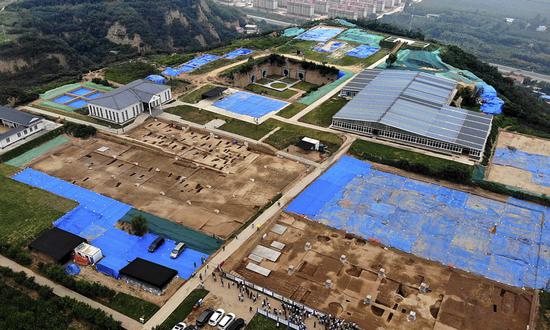 The Shuanghuaishu site in Gongyi, Henan province, was found to contain the ruins of a huge city dating back 5,300 years. (Photo/Xinhua)

President Xi Jinping has commended the role of China's archaeological discoveries over the past century in demonstrating the long-lasting and profound Chinese civilization and has called for developing archaeology with Chinese features, style and ethos so that it contributes to national rejuvenation.

Xi, who is also general secretary of the Communist Party of China Central Committee and chairman of the Central Military Commission, made the remarks in a congratulatory message delivered at a meeting held in Sanmenxia, Henan province, on Sunday to mark the centenary of the discovery of the Yangshao Culture and the beginning of modern archaeology in China.

The Yangshao Culture, dating from 5,000 to 7,000 years ago, is the longest-lasting cultural type in archaeological studies from China's prehistoric period. In October 1921, Swedish scholar Johan Gunnar Andersson, then a geology consultant for the Chinese government, led a major excavation in the village of Yangshao in Sanmenxia, Henan province, and discovered a Neolithic culture best recognized for its painted pottery.

The discovery astonished Chinese academia and inspired domestic archaeologists to make a series of milestone additional discoveries nationwide in the 1920s. These are also seen as the beginning of modern archaeology in China.

Xi said in his message that over the past 100 years, generations of archaeologists have made a series of major discoveries through their unrelenting efforts, demonstrating the origins of Chinese civilization, its developments, achievements and contributions to the civilizations of the world.

They have played an important role in making the long-lasting and profound Chinese civilization better understood, he said.

Xi called on Chinese archaeologists to strive to develop archaeology with Chinese features, style and ethos to better showcase the splendor of the Chinese civilization, carry forward the fine traditional Chinese culture and make new and greater contributions to realizing the Chinese Dream of national rejuvenation.

Xi, who has striven to boost confidence in Chinese culture in recent years, has often emphasized the importance of developing archaeology to better understand Chinese civilization, protecting historical and cultural heritage and promoting exchanges with various cultures to build a better world.