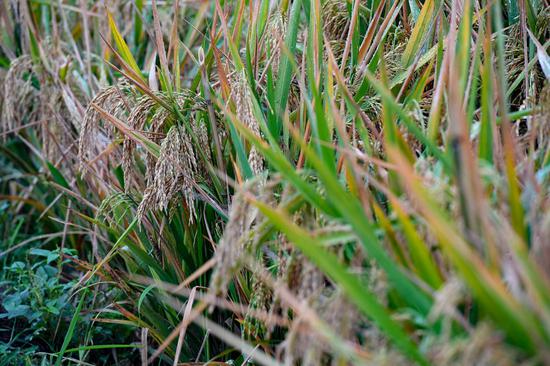 The third-generation hybrid rice developed by Yuan Longping, the "father of hybrid rice," and his team achieved a new record of yield in rice fields in central China's Hunan Province.

Hunan is one of the major rice producers in China, where farmers plant double-cropping rice. Among the output of the hybrid rice, the yield of early rice came to 667.8 kg per mu in the test fields, and that of late-season rice stood at 936.1 kg per mu.

Last year, the same hybrid rice variety made a double-cropping yield of 1,530.76 kg per mu in a year on the same plot.

"Surpassing a yield of 1,500 kg per mu in a year on the same plot means that the target set by Professor Yuan Longping has been realized," said Li Jianwu, a researcher at Hunan Hybrid Rice Research Center.

The high yield under unfavorable conditions of the earlier continuous high temperature has shown that the variety has strong adaptability and has laid a good foundation for future promotion, he said.