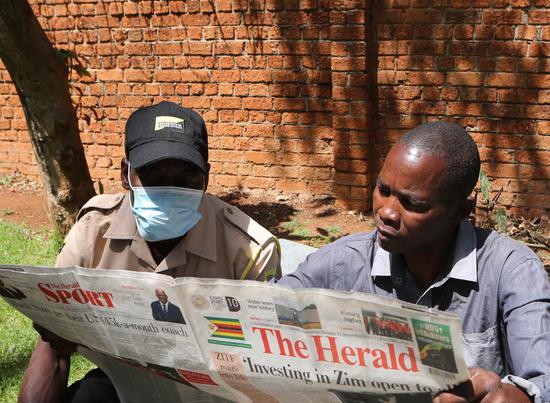 The Bureau of Democracy, Human Rights, and Labor of the U.S. State Department is implementing "an intricate plan" designed by Washington to smear Chinese businesses in Zimbabwe "through disinformation, lies and sensationalism in the independent media and social platforms."

That is a plot exposed in an article published on Sept. 21 by Zimbabwe's largest daily newspaper The Herald, which revealed that the United States is funding and training local reporters to write anti-China stories and discredit Chinese investments.

Following the shocking exposure, Zimbabwean officials, media outlets and citizens have joined in a chorus of condemnation of the sinister move by the United States, and voiced support for ties between Zimbabwe and China.

In the article, The Herald said it received exclusive details indicating that "private media journalists were being trained by the Information for Development Trust," a self-proclaimed Zimbabwean independent investigative journalism center, with funding from the U.S. Embassy in Zimbabwe.

Noting that a workshop drawing about a dozen private media journalists was held on Sept. 14-15, the article said the journalists "were allocated regional/geographical areas of focus with emphasis on areas where Chinese businesses are involved," such as mining, construction, energy, infrastructure, loans and environment.

They were told to portray Chinese companies as "causing harm to communities, environment and workers," the article noted.

"One attendee at the workshop revealed that journalists involved in the workshop have already been given areas and topics to work on according to areas of interests as well as geographical areas," it said.

The next phase, according to the revelation, is producing content and publishing stories in various media outlets, with journalists receiving payment of 1,000 U.S. dollars per story from the U.S. embassy through its proxy.

"U.S embassy officials bragged during the workshop that they had ... previously sponsored media institutions on the so-called accountability issues," the article said.

It noted that they also funded some journalists that are now strategically positioned within the independent media, and have been "availing resources to 'people that matter' to focus on resource governance and labor issues and providing the 'right instruments.'"

Besides the U.S. plot, the European Union and some Nordic countries are also sponsoring similar workshops, it added.