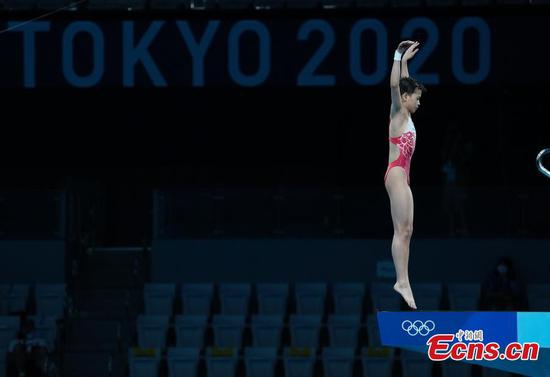 Quan Hongchan has dived and charmed her way straight into the nation's heart.

After winning gold with three perfect scores in the women's 10-meter platform final on Thursday, the 14-year-old's endearing interviews and moving revelations about her upbringing have captured the public's imagination perhaps like no other Chinese athlete at the Games.

True to her innocent and unassuming nature, she admitted that speaking in front of the cameras makes her even more nervous than leaping off the platform at the Olympics.

"I just want to eat a lot of delicious food, like spicy gluten strips," said Quan after winning gold. "I'm clumsy, and I'm not good at academic study. I just know how to dive.

"And what's my secret in diving? I don't know. Some people say my splash into the water is even smaller than the splash they make when they throw a dumpling into a pot. I don't know and I never compare it."

Quan, who hails from a family of modest means, was barely known before the Tokyo Olympics. Now she suddenly finds herself a huge star on social media.

By Sunday afternoon, her Weibo account had amassed over half a million followers. The teenager was the subject of around 30 trending topics, ranging from her diving performances to her childhood experiences.

Her interviews have aroused particular interest in her family's predicament.

"My mom is sick now. I don't know how to pronounce the name of her illness. I really want to make more money to help her receive better treatment. I need to make more money, so I can cure her," Quan told a news conference.

Quan was born and raised in the rural village of Maihe, Zhanjiang, Guangdong province. In 2017, her mother was injured in a car accident on the way back from the factory where she worked.

Since then, the medical bills have piled up, and left Quan's father as the family's sole earner. When the accident occurred, Quan had been diving for just three years.

The city of Zhanjiang has been a cradle of elite Chinese divers through the years, producing the likes of Lao Lishi, who won gold at the 2004 Athens Games, and He Chong, who triumphed at the 2008 Beijing Olympics.

During a visit to Maihe Primary School, Chen Huaming, the diving coach at Zhanjiang Sports School, noticed Quan was more agile and jumped much higher than the other kids. After giving her a try on a diving board, he instantly knew he had discovered a true talent.

Chen suggested to the youngster that diving could be the answer to her family's financial issues. Immediately, Quan made up her mind to become the best in the sport.

Quan was not the only youngster to impress Chen, but he admitted she was the one that always practiced the hardest.