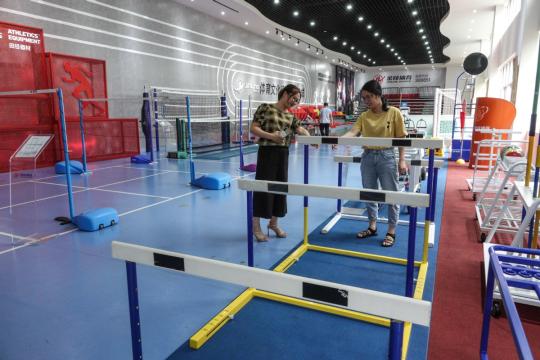 The government's continued efforts to develop the high-end manufacturing industry and the sports sector imparted momentum to the A-share market on Wednesday.

At a meeting in Beijing on Friday, the Political Bureau of the Communist Party of China Central Committee decided that proactive fiscal policies should be adopted to generate greater effect.

Investment included in government budgets and local government bond issuance should be carried out at a reasonable level so that substantial work progress can be made by the end of this year or early next year, a statement issued after the meeting said.

Jiang Wei, an analyst from Wanlian Securities, wrote in a note that the lower-than-expected first-half issuance frequency of local government special bonds (LGSBs), which are key to the machinery sector, was mainly due to the normalized management of such bonds and the moderately extended issuing time.

The issuance of LGSBs and related financial instruments accelerated in June to 560.6 billion yuan ($86.8 billion), up 377 percent year-on-year.

Partly due to the lower LGSB issuance rate, the machinery sector has undergone significant contraction this year, with the average price-to-earnings ratio coming in at 11 times at present.

But, as the industry leaders taking up more market share and improving their operational efficiency, their valuations will be improved amid the accelerated issuance of LGSBs, Jiang said.

Yang Zeyuan, an analyst from Citic Securities, said China has stressed the strategic importance of industrial software and industrial internet to the development of high-end manufacturing industry.

The country's resolve has been further consolidated with the announcement of a number of policies by Ministry of Industry and Information Technology in July.

As companies specializing in production scheduling and control software reported high growth in their half-yearly results, the industrial software industry is sure to attract financial capital, thus generating opportunities for investors, he said.

The sports sector is another beneficiary of government policy. According to a circular released by the State Council, China's Cabinet, on Tuesday, the country will further promote sports and physical exercise during the 14th Five-Year Plan period (2021-25). Up to 38.5 percent of its population will participate regularly in physical activities by 2025.

Beijing-based market research firm CCID Consulting estimated that China's sports sector will see its value exceed 5 trillion yuan by 2025, given the support it has been receiving through policies, financial capital and the stock market.

Analysts from Huaxi Securities pointed out that higher targets have been set in the State Council's latest circular. The suggested 38.5 percent exercising population has raised the 32 percent bar set in the target released in 2011.

Sportswear and sports equipment companies will continue to produce strong performance as the central government aims to create more sports venues and increase the penetration rate of sports, said the Huaxi Securities analysts.