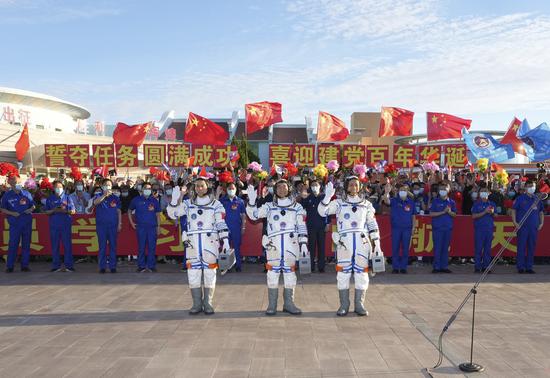 A see-off ceremony for three Chinese astronauts of the Shenzhou-12 manned space mission was held in the morning of Thursday at the Wentiange square of Jiuquan Satellite Launch Center in northwest China.

At the command of Li Shangfu, commander-in-chief of China's manned space program, astronauts Nie Haisheng, Liu Boming and Tang Hongbo set out at 6:32 a.m., to be the first Chinese astronauts to live and work in the country's space station currently under construction.

The Shenzhou-12 spaceship is expected to be launched at 9:22 a.m. Thursday (Beijing Time) and the crew will stay in orbit for three months for the construction of China's space station.