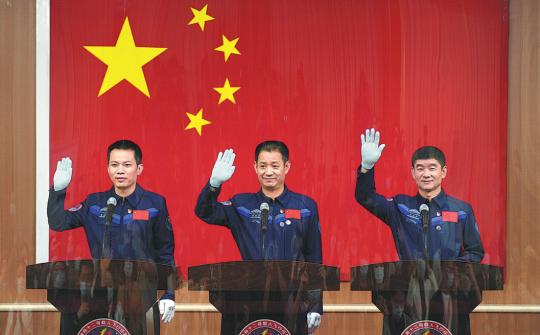 Astronauts (left to right) Tang Hongbo, Nie Haisheng and Liu Boming－crew of the Shenzhou XII spacecraft－attend a news conference at the Jiuquan Satellite Launch Center on Wednesday. They are scheduled to be sent into space on Thursday morning. （SU DONG/FOR CHINA DAILY）

China will launch its seventh manned space mission on Thursday morning to send three astronauts to the core module of the nation's permanent space station, according to a project leader.

Ji Qiming, assistant director of the China Manned Space Agency, told reporters at a news conference on Wednesday at the Jiuquan Satellite Launch Center in northwestern China that the crew on board the Shenzhou XII spacecraft－Nie Haisheng, Liu Boming and Tang Hongbo－will be taken into space by a Long March 2F carrier rocket at 9:22 am on Thursday at the launch complex and will become the first occupants of the core module after their spacecraft docks with the module, which is traveling in a low-Earth orbit hundreds of kilometers above the ground.

Ji said that during its three-month stay in the module, named Tianhe, or Harmony of Heavens, the all-male crew is tasked with testing and verifying plans, technologies and equipment for crucial elements in the space station's construction and operation, such as astronauts' long-term mission arrangements, the life-support system, in-orbit resupply and extravehicular activity as well as spacecraft maintenance and repair.

They are also assigned with carrying out other space tasks and experiments.

Ji said that after Nie's crew finishes its three-month mission, it will return to Shenzhou XII and then depart from Tianhe and return to Earth to land at the Dongfeng Landing Site in the Inner Mongolia autonomous region.

He noted that Nie, who has already flown twice in space, will be the mission commander, adding that the mission's alternative crew members are Zhai Zhigang, Wang Yaping and Ye Guangfu.

Through this mission, the manned space agency will be able to accumulate experience and check the capability, performance and compatibility of systems involved in the space station program, according to the official.

The Long March 2F rocket to be used in the mission started to pump propellants into its fuel tanks on Wednesday morning, he said.

Tianhe was launched by a Long March 5B heavy-lift rocket at the Wenchang Space Launch Center in Hainan province on April 29. The largest and heaviest spacecraft China has ever built, the module is the first part of the Chinese space station, named Tiangong, or Heavenly Palace.

The module is now connected with the Tianzhou 2 robotic cargo ship, which was launched by a Long March 7 rocket from the Wenchang facility on May 29. The two spacecraft docked with each other the next day.

All pre-launch preparations have so far been completed. The Tianhe-Tianzhou 2 combination is orbiting Earth at an altitude of about 390 kilometers, waiting for astronauts' arrival, Ji said.

Hao Chun, director of the China Manned Space Agency, told China Daily in April that the Tianzhou 3 cargo ship will be launched from Wenchang in September to dock with Tianhe. The next month, another three-astronaut team will fly to the core module on Shenzhou XIII to work there for six months.

Responding to China Daily's question on concerns over debris from rockets and spaceships, Ji said that it is international practice to leave a rocket's last stage to uncontrolled orbital descent and then atmospheric reentry, stressing that people should not worry about debris from Chinese rockets.

"All of our rockets to be used in the construction of our space station have technologies to ensure their last stage will not explode in orbit, which will create space junk, and most of the stage will burn up during the reentry into the atmosphere. The chances of causing harm to air traffic activities and people and assets on the ground are very low," he said.

The agency has closely monitored the atmospheric reentry of rockets previously launched and published related information in a timely manner, according to the official.