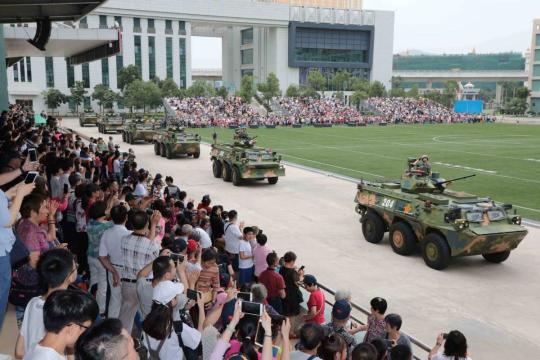 PLA soldiers salute as they pass spectators during an open house at the Macao garrison in May. (YE HUAMIN/XINHUA)

Song Haiqiang, an officer at the People's Liberation Army Macao Garrison, said he was truly moved during an open house held at his base on Taipa Island in May.

"The first part was the national flag-raising ceremony. Everyone－soldiers and civilians－was required to stand and sing the national anthem," said Song, commander of an armored infantry company at the garrison.

"I saw many Macao people burst into tears as the national flag was carried and escorted by six local children. Some people also shed tears when they sang the national anthem."

He attributed the tears to increased patriotism among Macao people, who, according to him, regard the garrison as a symbol of the motherland in the city.

"Each time we host a three-day open house at our base, thousands of Macao people form a very long line outside the main gate to get entry tickets," Song said. He explained that everyone with a Macao ID card is eligible for one free ticket, and the number for each day is limited because of the base's small area and restricted visitor capacity.

"Many people are eager for the opportunity to see our base and find out what the soldiers do at the barracks, so the tickets always run out before everyone in the line gets one," he said.

"It is not uncommon to find some people are unwilling to leave, saying they don't mind paying for a ticket. Some stand outside the walls of the base, trying to see what's going on inside."

Song said the garrison prepared 2,000 handheld national flags for Macao residents attending the open house in May, but found that the flags were so popular it did not even have enough for the first day. The garrison had to place orders for 2,500 extra flags for the second and third days.

In March 1999, the PLA Macao Garrison was set up in Zhuhai, a coastal city in Guangdong province that neighbors Macao. The soldiers entered Macao on December 20, 1999－the day China resumed its exercise of sovereignty over the "Monte Carlo of the Orient" after more than 400 years of colonial rule by Portugal.

The garrison held its first open house in Zhuhai in November 1999, and to date has organized 16 such events, receiving more than 100,000 visitors. The open day usually takes place at the Taipa Island base in May every year.

Zhang Yan, a staff sergeant at the garrison who has taken part in the open house for many years, said he has noticed that the number of Macao residents singing the national anthem－March of the Volunteers－during the events has risen every year. When last year's open house began, he was surprised to see almost all the local people present singing the anthem.

"I was really amazed that everyone, including small children, who I guessed were no older than 5, were singing the anthem. The children near my duty position couldn't stay in tune for the whole anthem, but they seemed to be trying their best to do so. I was touched and could feel the tears in my eyes."