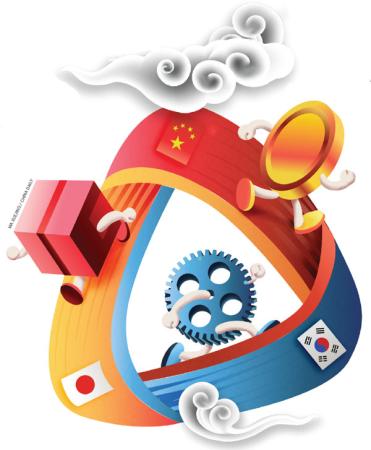 Trilateral meeting to focus on fostering future trade cooperation among them

The trilateral event, to be hosted by Premier Li Keqiang in the capital of Sichuan province, will focus on designing a vision for future cooperation and expanding common interests, he said.

New cooperation proposals will be laid out in areas including science technology, sustainable development, coping with an aging society, people-to-people exchanges and cooperation with parties outside the trilateral mechanism, he said.

"The fundamentals of the Chinese economy will remain positive and stable over the long term, and China stands ready to share its market and growth opportunities with Japan and South Korea," he said.

The trade volume between the three countries exceeded $720 billion last year, with over 31 million individual cross-border trips made within the three nations. Japan and South Korea are China's second-and third-largest trading partners, respectively, while China is the largest source of inbound tourists for both countries.

The FTA should improve the level of trade liberalization for cargo, services and investment and must be comprehensive, high-level and trilaterally beneficial, he said. It will also tap into the potential for trilateral economic and trade cooperation, enable deep integration of industry chains and provide fresh momentum for the global economy, he said.

Another key topic to be discussed at the meeting is the situation on the Korean Peninsula. As close neighbors and parties involved, the three countries will continue to promote peace and facilitate talks, said Luo, the vice-foreign minister.

"The Korean Peninsula issue has not yet deviated from the track of dialogue and consultation and is still within the framework of political settlement," he said.

Maintaining peace and stability on the peninsula and promoting a political settlement of the issue fits into the common interests of all sides, including China, Japan and South Korea, he said.

Under the current circumstances, China hopes relevant sides can exercise restraint, meet each other halfway and enable sound interaction through dialogue and consultation to ensure the situation will not deteriorate, he added.