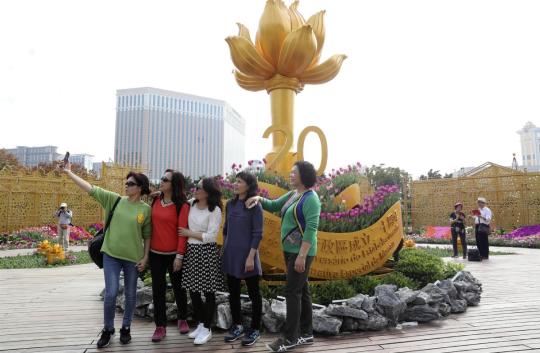 Tourists from Guangzhou, Guangdong province, take photos in front of a flower bed celebrating the 20th anniversary of Macao's return to the motherland in Macao on Tuesday. (FENG YONGBIN/CHINA DAILY)

Macao, which has witnessed a travel boom in the 20 years since its return to China, is now striving to build itself into a world tourism and leisure center by tapping into national development policies and its rich cultural resources.

In 2008, the National Development and Reform Commission, the country's top economic planner, released a guideline with the aim of building Macao into a world tourism and leisure center.

The policy was further stressed in the country's 12th and 13th Five-Year Plans, covering the period from 2011 to 2020.

First opened as an overseas travel destination to groups from the mainland in the 1980s, Macao started to receive individual visits by mainland residents in 2003 and has enjoyed increasing popularity since then.

Fernandes said Macao's tourism facilities and services have improved thanks to the travel boom.

The number of visitors staying overnight in Macao has also risen continuously, contributing to the growth of tourism-generated revenue, she said.

The Macao Yearbook 2019, published by the Macao SAR government, said the number of overnight visitors totaled about 18.5 million last year, up 7.2 percent year-on-year.

Fernandes said the tourism boom has brought economic benefits to the region and more job opportunities for residents.

The unemployment rate in Macao has remained low in recent years, at around 1.8 percent. Among the 380,000 people employed in 2017, about 190,000 worked in tourism-related positions, according to government data.

Wong Fai, president of the Macao Leisure Tourism Services Innovation Association, said the dramatic changes in Macao's tourism industry in the past 20 years have been impressive.

"I worked as a concierge, planning sightseeing schedules and answering phone calls from travelers, when I first joined the industry in the 1990s," he said. "Back then, there were only a few million travelers a year, with 60 percent of them from neighboring Hong Kong.

"However, the number of travelers the region receives in 2019 may top 40 million, with 70 percent of them from the Chinese mainland."

To offer travelers a more diversified experience, Macao is endeavoring to develop more attractions and sightseeing routes, apart from its famous Ruins of St. Paul's - the surviving facade of a church dating back about 400 years - and delicious food and snacks.

"We can refer to the experience of some advanced tourism destinations like Monaco, learning from them about how to develop high-quality tourism within such a small area of land," Wong said.

"Also, it's necessary to introduce some world-class games and conferences to help build Macao into a high-end leisure and entertainment destination."

Fernandes said Macao has a promising future in developing tourism.

"The operation of the Hong Kong-Zhuhai-Macao Bridge has better connected the regional area, bringing more possibilities to Macao's tourism industry," she said.

"The plan (released in April) on developing the Hengqin International Leisure Tourism Island, which neighbors Macao, will also enhance tourism-related cooperation between Guangdong and Macao."

The cultural industry was also emphasized by the Macao SAR government, as more travelers are seeking out cultural experiences.

Chan Kai Chon, vice-president of Macao's Cultural Affairs Bureau, said in a recent interview that the contribution of the cultural industry to the region's GDP rose by 6 percent to 8 percent every year between 2015 and 2017.

"In 2017, the industry created revenue of about 7.08 billion patacas," he said. "The industry is growing at a stable pace."