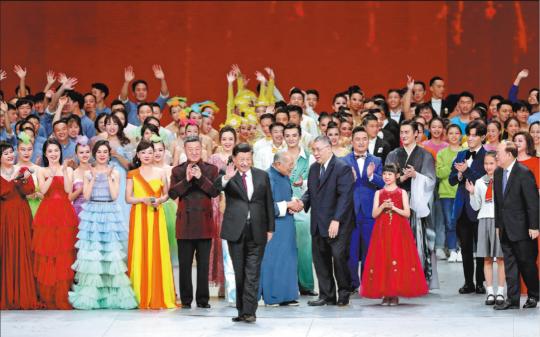 President Xi Jinping attends a grand gala in celebration of the 20th anniversary of Macao's return to the motherland in the Macao East Asian Games Dome on Thursday evening. (FENG YONGBIN/CHINA DAILY)

The historic socioeconomic achievements the Macao Special Administrative Region has made over the past 20 years are due to full implementation of the "one country, two systems" principle, President Xi Jinping said on Thursday while addressing a welcoming banquet hosted by the Macao SAR government.

Xi said the SAR's growth is also due to strong support from the central government and people in the mainland, the active role of the SAR government and the united efforts of Macao residents from all walks of life.

He said the SAR government and Macao's people should be commended for upholding the principle of "one country, two systems" in line with actual conditions of the region, and they should be praised for making bold explorations and innovations in practicing the principle with Macanese characteristics.

While saying that "loving the motherland and loving Macao" has become the core value of the society of Macao, Xi said the region also firmly adheres to the Constitution and upholds the authority of the Basic Law.

He also praised the region for proactively integrating its development with the country's growth, and the SAR has become more inclusive and harmonious as it builds social solidarity.

Reviewing the great achievements China has made over the past 70 years, Xi said it has been an era during which the Chinese nation enjoyed greater development, and also an era in which Macao strove to be more prosperous together with the mainland.

The practice of "one country, two systems" with Macanese characteristics will see even greater success, and Macao compatriots can make even more contributions to realizing the Chinese dream of national rejuvenation, Xi added.

Speaking at the banquet, Macao Chief Executive Chui Sai-on said the most valuable experience for Macao in practicing the "one country, two systems" principle is fully and faithfully implementing the Constitution and the Basic Law. The core is that Macao accurately understands and fully supports the political system and the core value of the country, Chui added.