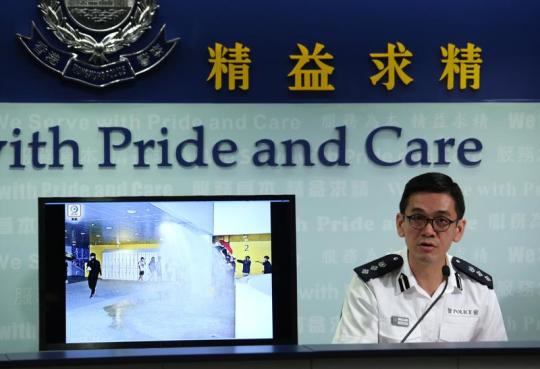 Hong Kong police have banned a protest march planned to be held in Kowloon on Sunday, saying that based on its latest intelligence, deadly attacks are likely to happen, posing a serious threat to public safety and order.

Yau Tsim District Commander Ho Yun-sing stressed on Friday the ban is not aimed at suppressing freedom of assembly.

The police had earlier issued a letter of objection to the march in Tsim Sha Tsui — one of Hong Kong's busiest commercial districts — on Sunday afternoon. The organizer, the Civil Human Rights Front, said it expected about 50,000 participants to take part in the procession which would end at the West Kowloon high-speed rail station.

The violence associated with protests in the past four months had escalated to a point where rioters had extensively damaged public facilities, government buildings and retail stores by recklessly hurling gasoline bombs and starting fires, Ho said.

Innocent passersby holding different views were left bleeding after being savagely attacked by rioters, while police officers had also been brutally assaulted with all kinds of weapons.

Ho said a much more worrying sign is that some rioters had begun using home-made bombs last weekend. A number of people have also been arrested for possession of drones and other devices set up to detonate bombs at a distance.

He warned that anyone who defies the rally ban on Sunday risks breaking the law, and urged the public to stay away from Tsim Sha Tsui.

Meanwhile, Commissioner of Police Stephen Lo Wai-chung said he was confident that the police would overcome the "unprecedented challenges" posed by the social unrest in the past few months, and that law and order would be restored.

He made the remarks on the Force Remembrance Day (Friday) to commemorate those who had given their lives in serving the Hong Kong community.

"In the past few months, widespread social unrest had posed an unprecedented challenge to the force and Hong Kong. The escalating violence has seriously disrupted public order and endangered the safety of the public and our officers," Lo said.

But, the police chief said he was optimistic that Hong Kong and its police force would ride out the political storm.