Li says challenges to be confronted 'head on' 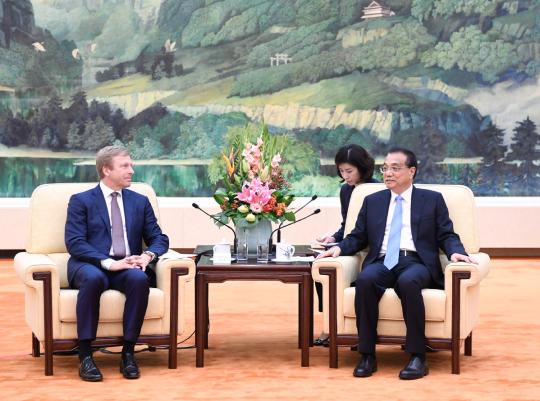 Premier Li Keqiang meets with an executive from multinational manufacturers in Beijing, on Oct 18, 2019. (Photo/Xinhua)

China's economy achieved stable growth in the first three quarters, and the country can accomplish its targets for economic and social development for the year, Premier Li Keqiang said on Friday.

The premier said in a meeting with executives from multinational manufacturers that major indicators of China's macroeconomy have remained within an appropriate range in the face of a complex global landscape.

"We will shore up our confidence while confronting the difficulties head on," he said.

China has set a target of maintaining its GDP growth between 6 and 6.5 percent this year.

Li said the sustained healthy growth of the economy will provide more opportunities for overseas businesses to make investments in China. Manufacturing is a fundamental sector for a country to achieve industrialization and modernization, he said.

China, as a developing country, is accelerating the development of its manufacturing sector, and it has become an inseparable part of the global value chain and a huge market for manufactured goods, he said.

Li said the government considers the development of advanced manufacturing to be a strategic measure, and it has rolled out steps such as tax and fee reductions, widened market access, fairer oversight and better protection of intellectual property rights.

The goal is to create an enabling environment to move the sector to the medium-high end of the global value chain and to achieve high-quality development, he said.

The development of advanced manufacturing requires further opening-up and cooperation, and China welcomes global businesses to use opportunities from China's expanded opening-up to increase cooperation and further explore the market, he added.

The executives are part of the international consulting committee on advanced manufacturing, a panel organized by the Chinese People's Association for Friendship with Foreign Countries. They welcomed measures to cut taxes, reduce fees, streamline administration and step up the protection of intellectual property rights, according to a statement released after the meeting.

They also expressed hope for accelerating cooperation with China in promoting the upgrading and transformation of industries.